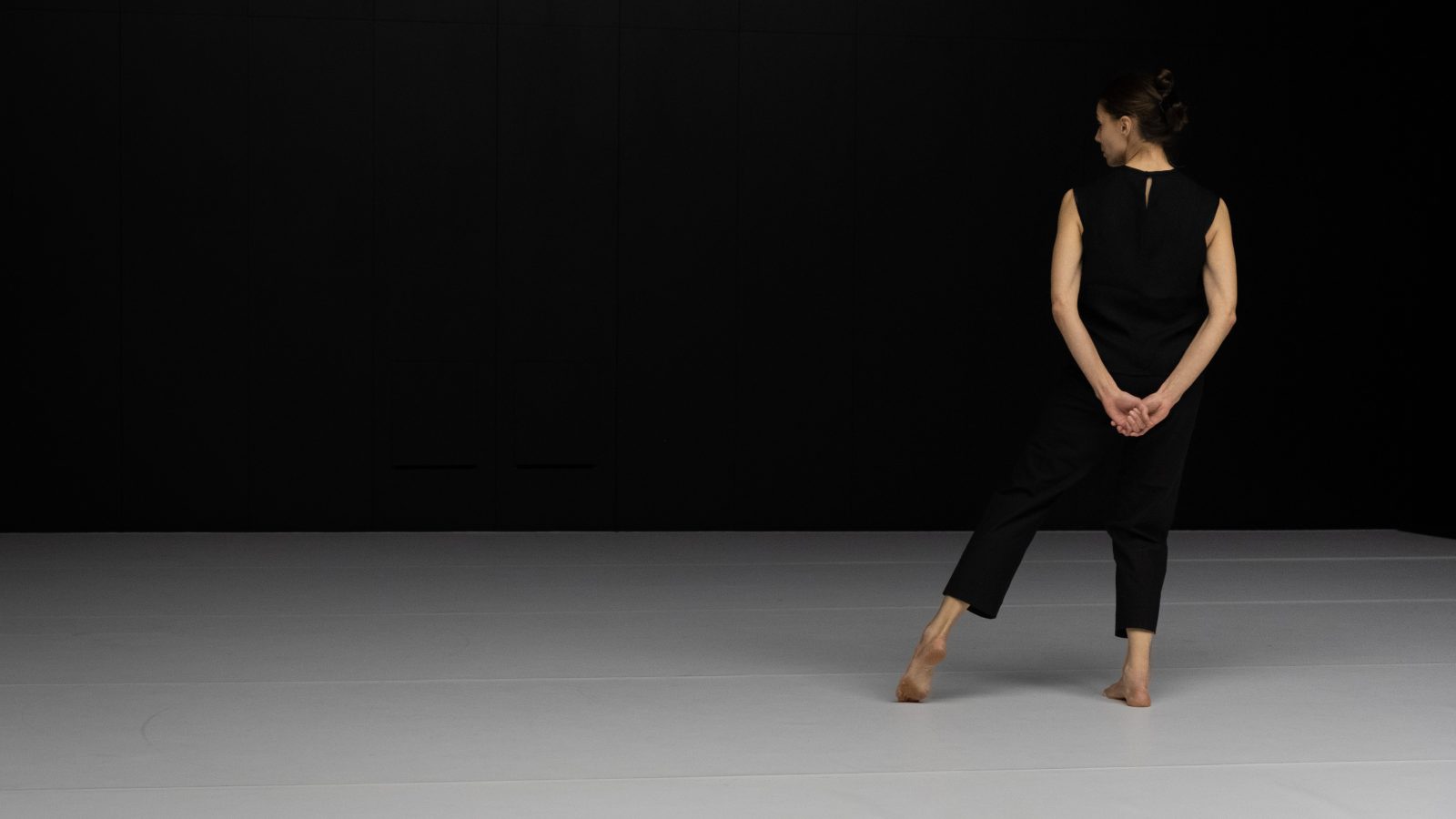 Cindy Van Acker‘s two solos – V and IX – are part of the ten in the Shadowpieces series. Each solo is built starting from the intimate relationship between performer and choreographer, in search of somatic and empathic connections. The performers choose a universe of sound starting from a selected repertoire that includes electronic pieces and instrumental pieces, in an anthology that spans the last century.
Each solo develops an idea of conversation, a synchronisation on the qualities of movement and those morphologies, impulses and dynamisms, thos inner and physiological states that incite the performers, giving life to short, deliberately unfinished solitary objects. If Cindy Van Acker’s research is internationally recognised for an extremely guarded attitude to compose and decompose movement through processes of molecularisation of the scenic material by means of intercorporeal resonances, Shadowpieces offers up an experience of subtle listening made up of small epiphanies.

Thanks to the support of the Istituto Svizzero and in convergence with the Teatro di Roma – Teatro Nazionale, the collection of Shadowpieces arrives in Rome in a chain of glances, which started in June from Buffalo to end now at Short Theater 2022.

Co-created with Stéphanie Bayle, Les éphémères is a journey through familiar, surprising and extravagant landscapes. The poetic writing of Anita Pittoni, author of Confession téméraire, accompanies the creation of this solo by stimulating an intimate imagination and a willingness to be surprised. References to the cinematographic movement of the Nouvelle Vague suggest a writing of the body through different degrees of intensity which feed a distortion of time and a desecrating humour. The versatility of Fred Frith’s No Birds, the solo’s soundtrack, is in perfect harmony with the freedom that animates the composition.

Co-created with Anna Massoni, Verso suggests an analogy between floor and page. A space that welcomes every step, one by one, an incorporation of the notes and signs of the score. A walk on the margin takes shape, a process in which something that usually remains forbidden or perhaps deliberately hidden is shown. The fingers of the piano, like the whole body, give and take. Three pieces for piano by Arnold Schöenberg are crossed by the overturned perspective suggested by Schönberg’s painting Self-portrait from behind, in which a walking figure is seen from behind.

Trained in classical dance in Antwerp, Cindy Van Acker started her creative path in 1994, to found Cie Greffe in Geneva in 2000. Her meticulous style, which combines slowness, mentalisation, constriction, geometry, minimalism and the spatialisation of sound, unfolds in an extremely singular territory. For over 20 years, alternating powerful solos and evocative collective performances, she has been producing an essential and abstract dance but always connected to the ideas of struggle and resistance. Her research often requires the radical exploration of a single body before finding the multiple: this is the case of the six solos Obvie, Lanx, Obtus, Nixe, Noda and Antre (2008-2009) which lead to Piece for Six and Diffraction (2011) and the ten Shadowpieces (2018—2021). Her latest collective work is Without References (2021). Her career has been particularly influenced by her encounters with Romeo Castellucci, Myriam Gourfink, Mika Vainio and Victor Roy.

From 7 to 10 September in the spaces of the Atelier at La Pelanda there will be a screening of Orsola Valenti‘s film project by, 6/6, which cinematically rewrites the solos created for the stage, transporting them to outdoor locations.