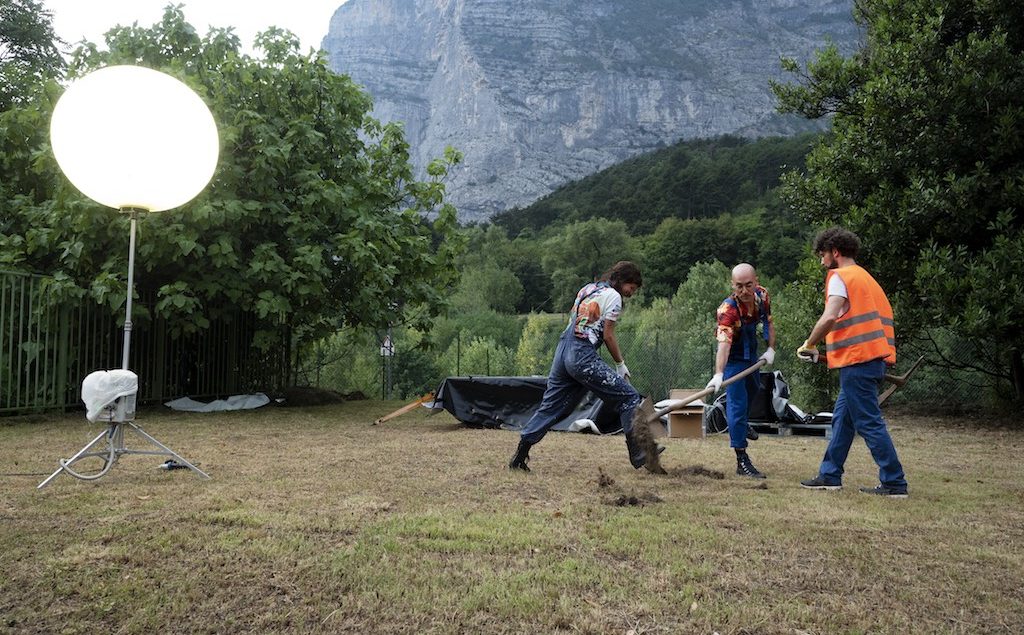 In June 2018 we made a record of eight pop songs, which were entirely written, played and sung by us two visual artists and performers who had never played an instrument before.
In re-establishing a relationship with doing, in imagining a synthetic and symbolic action, we imagined ourselves digging like children on the beach, like a hole in the bank, like the foundations of a house or digging a grave. then Cosmesi fa un buco is a hole dug by Cosmesi. During the excavation songs happen, in the difficulty of not knowing how to play our songs. Cosmesi fa is a disguise. An impossible mixture: the overlap of two worlds, finding oneself playing the role of
impostor and ignoring the limit, pretending.

Cosmesi was founded 17 years ago by Eva Geatti and Nicola Toffolini. Since the beginning, the group has been collaborating with various artists to develop hybrid projects within the context of theatre, installation and performance art. The first work (2003) had a very long title, while the latest production (which premiered at Ipernatural – Drodesera Festival, 2019) is called Cosmesi fa un buco, it is the last piece of a project that contains many others (a record, a live concert, a video clip…).

Secretly, I guess, there are Hamlet’s gravediggers. Cosmesi fa un buco was born as a playful, surreal, extremely concrete gesture, far from that more abstract acting that kept us busy composing our album. When I reread what those three gravediggers said, I admit it was very illuminating: it is the hand’s reasoning, they talk about death and life holding a hoe, ground material inside. Then they sing while digging! Maybe that is exactly what is behind the work.

Eva I will start from the end. Fifteen years ago I really believed in the existence of theatre (therefore I would have never imagined finding myself digging a hole while singing pop songs I wrote with my company). Everything was building, adding, forming a sense inside the reference of theatre itself.
In fifteen years I would say this work, and the whole adventure surrounding it, were essential to help me found my prestigious bizarre archaeological company… who knows.

Nicola Fifteen years ago, it would have never, ever crossed my mind to sing or to improvise in one of our works. In fifteen years, I hope to be in Greece making retsina, and I would probably say that the time of “Cosmesi MAKES” (an Album, a Live Show, a Videoclip, a Hole…) allowed me to overcome a lot of foolish limits.