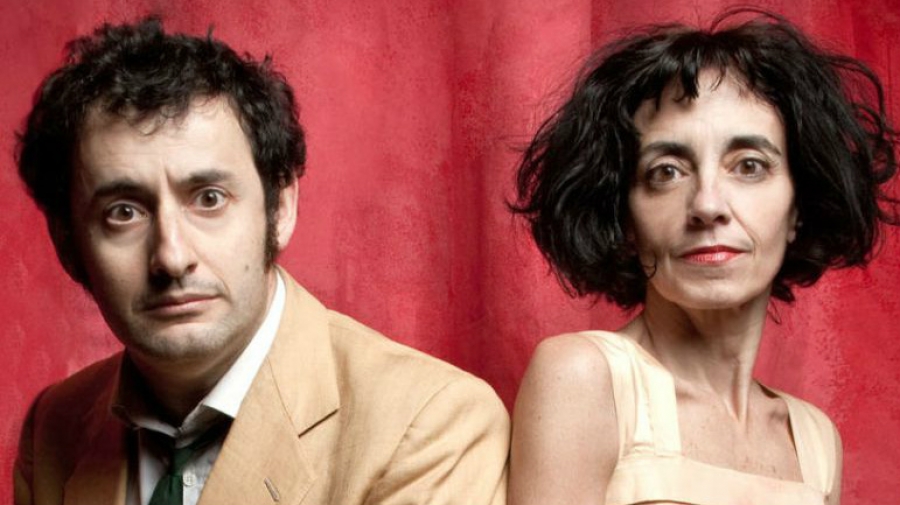 Elvira Frosini and Daniele Timpano are authors, directors and actors on the Italian contemporary scene who since 2008 have shared a common artistic path. In numerous works produced over recent years, Frosini/Timpano use their bodies onstage to disarm, deconstruct and embody  history’s narratives, using a vast trove of different references to analyse the anthropological drifts of societies, from the academic to the pop cultural, which constitute contemporary imagination and consciousness.

Their texts are staged using a complex theatrical construct in which the actors-authors are always in dialogue with the public. They are poised between manifestations of character, contemporary and cultural mythology, historical topoi, and the simple act of being there and putting into play one’s perturbing relationship with history and culture, in a game of sleek wrong footing that debunks rhetoric without no quarter given, not even to themselves. “Our dialogue with the public is based on a co-existence with our audience, on what we share with you, here, today: the same hypocrisies, the same clichés, the same fears, the same neuroses, the same fate.”

For Panorama Roma this year they work on Ella Hickson‘s The Writer, opening the doors of their creative yard to the public.

The Writer is a meta-theatrical drama about a young writer who challenges the status quo but discovers that creative gain comes at a personal cost. The play starts in a theatre auditorium with an encounter between a Young Woman, who has come to watch a play, and an Older Man, who is part of the theatrical establishment. Pushed to say if she enjoyed the play, the Young Woman concedes that she has a different view of theatre from that which prevails: she sees it as a sacred space with a political purpose, and rails against the patriarchal orthodoxy that sexualises female performers and fails to reflect real life. The Older Man responds by suggesting she might write something herself, and in subsequent scenes, operating at several different levels of reality, we see how the suggestion plays out as the Writer faces up to the many obstacles in the way of realising her vision.

Ella Hickson is an award-winning writer whose work has been performed throughout the UK and abroad. Her play Oil opened The Almeida Theatre in October 2017 and her most recent show The Writer opened there in Spring 2018. She is a fellow of the Royal Society of Literature and twice a MacDowell Fellow. She is developing new work for The National Theatre, The Old Vic and Manhattan Theatre Club. She is also developing various projects for TV and film.

In your opinion, what is this text about?

The Writer is a complex and somehow very interesting text. We will work on a critical reading in which we will try to explore and bring to light the work themes and above all the complex structure game that the text contains. This work opens and keeps open many questions about theater and the world, which resonate significantly with us. In fact, these are the questions that we face continuously in our writing and making theatre, in addition to many others: the function of art, writing, theater, representation, the controversial relationship between art and society, between stage and audience, between the world of theater and money, and therefore power, in a world ruled by men. The female instance is clear in a patriarchal world managed and directed by males. We ask ourselves about the dramaturgical form, about the possibility of changing it, inventing it, breaking the forms that seem usual and established and that are also organic to a social and aesthetic world directed by men. All these questions are open, no answers to find, but they resound continuously in the dramaturgical construction of the text. A continuous shift of plans, which is no stranger to us, even if in our works the dramaturgical shifts generally proceed differently, more subtle and less declared, with less abuse of naturalistic clichés. In this work the representation in the representation, the direction, the relationship with the public, the text form are continually questioned, it is certainly a complex text, which we try to plumb in a critical form to bring to light the system of questions about both the world of theatre and our world.

How has the relationship between your work and the city of Rome changed in the last fifteen years? What do you wish for the next fifteen?

In the last 15 years the relationship between Rome and our work has certainly improved, it has grown on a personal level, our relations with the city institutions have grown over the years, we are more recognized on a national level, however, in essence, the city has not improved, from a cultural point of view it always proceeds in discontinuity. It is a reactionary city, many spaces where we grew up are now closed, dead or transformed, the people who animated them marched elsewhere more or less permanently, I certainly believe that there is always a lack of an organic project that welcomes and connects the artists and the realities of this city.
There is always the feeling of being in limbo, in a somewhat provincial atmosphere, it is difficult to unhinge the feeling of the difficulty of further growth, together with the others.

From the future we hope the opposite, we hope that the future will lie to the bullshit we have just said, that our fears would be averted by an absolute light that enlightens us, we hope that projects would really grow without starting over each time or being hindered. This is the city we live in, we create in, and what we need is a house where to design and above all to exchange, to be continuously in exchange with other artists and with the public, it would be right to make a large, broad, transversal project that connects all the existing resources in Rome, from the central to the peripheral, from the small to the large, it would be a beautiful project … but here we conclude because the projections into the future are always to be done with caution, in 15 years we will surely be here watching what we said 15 years earlier and we will have a tender nostalgia effect for prophecies that weren’t prophetic after all. But we will never know, so we have to keep fighting.