ANTICIPATION OF THE NIGHT

Kodwo Eshun’s Più brillante del sole, first published in 1998 and translated this year for the first time in Italian, is still today an unrivalled attempt to blend the history of black music, science fiction and theory fiction; it can be considered a timeless Afrofuturist  masterpiece.
Analysing the sounds of techno, jazz, dub and hip hop, as well as talking about “gods” like Sun Ra and Alice Coltrane, Lee Perry and Public Enemy, Drexciya and Underground Resistance, Più brillante del sole is more than an essay on music, it is a manifesto on the time when the ideas of race, authenticity and nationality will explode into a myriad of fragments coming from the future.

Kodwo Eshun’s classic Più brillante del sole, originally published in 1998 and never before translated into Italian, remains an attempt (still without heirs) to converge black music history, science fiction and theory fiction, earning the title of timeless masterpiece of Afrofuturism.
Taking its cue from the sounds of techno, jazz, dub and hip hop, talking about “divinities” such as Sun Ra and Alice Coltrane, Lee Perry and Public Enemy, Drexciya and Underground Resistance, Più brillante del sole is not limited to mere musical criticism, but is a manifesto of a forthcoming era in which the concepts of race, authenticity and belonging deflagrate in myriad fragments rained down from the future.

DJ, musician, producer, founding member of the labels Sounds Never Seen and Plasmek, radio speaker, promoter and journalist, Andrea Benedetti is a pillar of the electro scene and a protagonist of the debut of techno and clubbing in Rome in the Nineties. His Afrofuturist dj set is related to Più brillante del sole – presentation of the same-title book by Kodwo Eshun, published in Italian by NOT/NERO and curated by Valerio Mattioli. Andrea will explore the music “fragments raining down from the future” analysed in the book, ranging from techno to jazz, dub and hip hop. 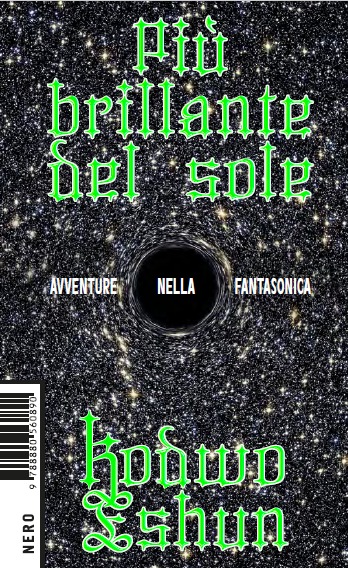