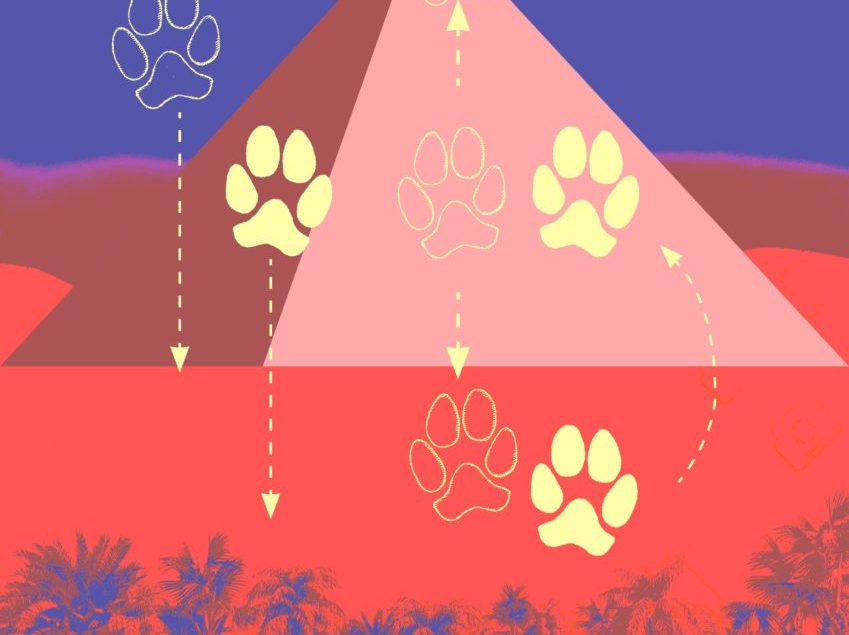 In 2019, Zapruder meets Mr Kari J., a distinguished man in his seventies in a bar in Helsinki, who asks him to keep his dog while he enters the club. On his return they begin to chat; It turns out that Kari is a judge of Dog Shows, beauty pageants for dogs, and is also a canine-themed art collector. Surprisingly, the man invites them to his home to admire the works he has collected over time: a collection of wonderful paintings and sculptures. Among the objects there is also an Anubis and Zapruder launches into conjectures about the possible ancestry of the Egyptian god with a canine face with the greyhound, but Kari is not there: “Anubis is not a dog”, he affirms firmly.

Anubi is a prepared place, with its own rules and a language of its own.
In Anubi is not a dog we witness the dance routines between dogs and owners, typical of the artistic-sporting discipline known as Dog Dance. Here the attention is directed towards the commands and calls that make up the relational code between the two partners. In the rapid succession of routine steps, it is evident how often the dog’s response to the master’s voice commands anticipates the command and determines the order of the next step of the choreography. At every level, it is a dance for couples made of discards, speed, stasis and rhythm.

Zapruder is the collective name that signs the audiovisual productions and happenings conceived and directed by David Zamagni and Nadia Ranocchi. Their practice develops through the film set, the performance, the acoustics and the sculpture, in the direction of a total experience. In 2000 they founded Zapruder filmmakersgroup with Monaldo Moretti, an audiovisual production and research collective that operates on the sets and post-production of Zapruder’s film projects.

© Courtesy of the artist

It is also the set of a film shot in a public space.

In May 2019 in Helsinki we met Mr. Kari J., a distinguished man in his seventies who asked us to hold his dog while he walked into the bar. Dolly, a young French bulldog with a talking gaze. When Kari returned we started chatting, until he invited us home to see his art collection. It turns out that he had been CEO for Finland of a world giant, and that for 40 years he has been a judge of Dog Show, beauty pageants for dogs. He lives in front of the bar where we met, in an elegant apartment with paintings, sculptures and art objects with a main canine theme. A magnificent collection. Among the objects we recognize an Anubis, and we venture into the supposed descendants of the Egyptian god with a canine face with the greyhound, but Kari does not agree, –Anubis is not a dog– affirms firmly, and he will declare it other times during our meeting.

It is one of the manifestations about the speaking in tongues that runs through our entire path. Fifteen years ago we had already written the story for a film with dogs performing on a TV show. There are obvious differences with –Anubis is not a dog-, especially other assumptions, but in fact we had imagined it.