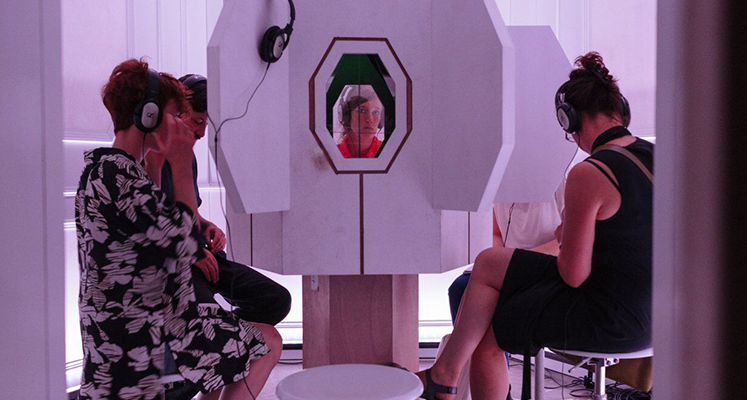 What happens after death? How can memories be represented? In the last century, the life expectancy in Switzerland increased by almost forty years. On one hand, highly specialised medicine has worked towards increasingly postponing death. On the other, legislation has begun to offer the possibility to decide when one will die. The German word Nachlass corresponds to what is left, both material and not, by the deceased – composed of “nach”(meaning “after”) and the verb “lassen”(meaning “to leave”). Stefan Kaegi accompanied eight people who, for differing reasons, decided to prepare to say their last goodbye. In collaboration with the set designer Dominic Huber, they built eight separate spaces, within which the eight protagonists speak of their eventual absence, of what will remain when they are gone. A Muslim organising the delivery of his body from Zurich to the city of his birth, Istanbul. A German banker, close to his end, reflects on his role in National Socialism. A ninety-year-old worker asks what story his photos will tell. Nachlass presents eight points of view on what heredity and succession mean today. In what way will legislation influence individual patrimonies? What do we want to give to the people we love, what do we want to leave to the Society we live in? The public enters in eight immersive spaces where voices, objects and images guide them to where there is a passage of testimony from one generation to another. The project will arrive in Rome for its national premier as part of the Roma-Europa Festival.

Rimini Protokoll is a collective of authors and directors, one of the most important of the new millennium. Their works engage mixed languages from theatre to sound to radio productions to cinema and installations, in a continuous development of expressive means to find fresh perspectives on reality. Stefan Kaegi has created theatre performances, documentaries, radio shows and urban-space performances, using the most disparate methods, giving voice to those he describes as “experts of daily life”. He questions them, invites them to act themselves and, using highly interactive means in general, he investigates the socio-political realities of our times Educated as an architect, Dominic Huber is a director and set designer. His installations are spaces that can be inhabited by an individual or group. Geared towards an augmented sense of reality, they aim to intensify the sensorial experience by modifying, engaging and manipulating spaces and situations.