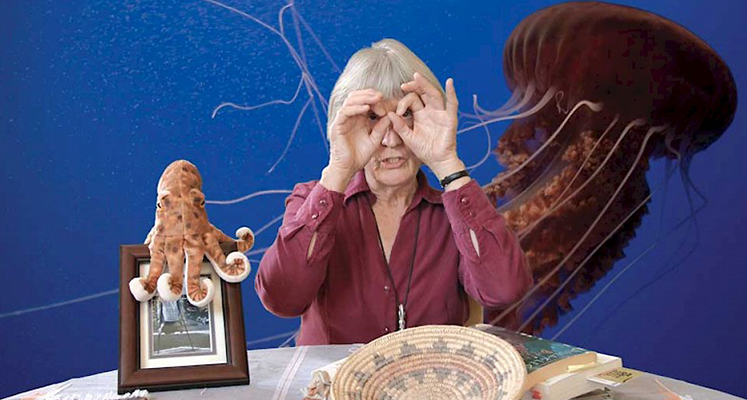 director | Fabrizio Terranova
produced in | 2016
in English with Italian subtitles

Donna Haraway is a thinker and researcher that has always worked in the fields of science and technology, a feminist and science-fiction enthusiast, constantly looking to build a bridge between the world of science and narration. In the 80s, she focused her reflections and studies on questions of gender, identity and technology, tearing open the scientific and philosophical panorama and opening the door to a shocking and joyous trans-gender feminism. Haraway is a narrator capable of depicting a rebel universe, critical but full of hope. The Italo-Belgian director Fabrizio Terranova met Donna Haraway at her home in California, sharing a few weeks of life with her: the film is a cinematographic portrait of this shared time, full of wise words and suggestions. The film is a declaration of love that Fabrizio Terranova makes to Donna, whose thoughts he already encountered twenty years earlier. The second work by Fabrizio Terranova, already having created Josée Andrei: An Insane Portrait, because “talking about old and strong women means offering a rebel sign to new possibilities.” Haraway speaks in her own environment, with alternating discussions and images that highlight her overwhelming sensibility, playful and speculative, a stunning mix of scientist, philosopher and science-fiction dreamer. A rare portrait of an exceptional thinker that is remarkably comprehensible. She speaks of intimacy, family constellations, interior states, but as Donna says, “Everything is political and everything is a collective affair.”