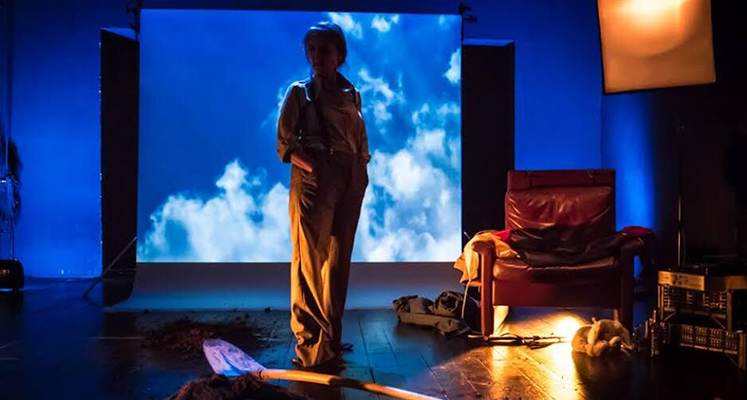 By Manfred Karge, translated by Sabrina Venezia from Karge’s original story Jackie wie Hose, directed by Fabrizio Arcuri, with Angela Malfitano, video sets by Lorenzo Letizia, assistant director Francesca Zerilli, produced by TRA UN ATTO E L’ALTRO and ACCADEMIA DEGLI ARTEFATTI in collaboration with the Ert-Emilia Romagna Theatre Foundation supported by the Region of Emilia Romagna. With thanks to the Theatre of Rome and Studio Spectrum.
A student of Berthold Brecht, and for years a close collaborator with Heiner Müller, Manfred Karge (1938) is still an active actor and playwright with the Berliner Ensemble. His best known work Jackie wie Hose is a monologue, subdivided into 26 short stories, inspired by events in Nazi Germany. Ella Gericke is widowed right in the middle of the Great Crash of 1929, and in order to survive she decides to impersonate her late husband, even to the length of driving a crane like he used to. It is the story of a radical transformation, one that questions gender identity in a socio-political context. Ella takes on her husband’s place in the social fabric of the time, and to do so uses her femininity not as a symbol but as a bold, decisive tool. For both their sakes she becomes her husband. This story, this poetic critique, is about necessary and unyielding transformation, the strength of the female word and a surreal choice that becomes the norm. It is the study of Nazi Germany, a system in decline. Its theatrical language wants to investigate the folds of reality, the origin of a crisis, the images of a possible revolt. Max Gericke is the second collaboration between Accademia degli Artefatti and Tra un atto e l’altro. Together they produced and staged FaustIn and out by Elfriede Jelinek in 2015.

Formed in the 1990s Accademia degli artefatti’s aim is one of promoting, organizing and disseminating theatrical culture. Their approach to work, with its mixture of figurative art, performance and installations, does not involve a rigid stylistic structure. The company has developed its own theatrical mode, with theatre as an object of continuous reflections and variations on reality. Tra un atto e l’altro is an association founded in 1999 by a group of artists and intellectuals from the city of Bologna. Their specific aim was to curate theatre projects dedicated to women and young people for the Bologna City of Culture 2000 series of events, as well as to generally offer better visibility and an organic network for diverse experiences combining theatre and cultural research.