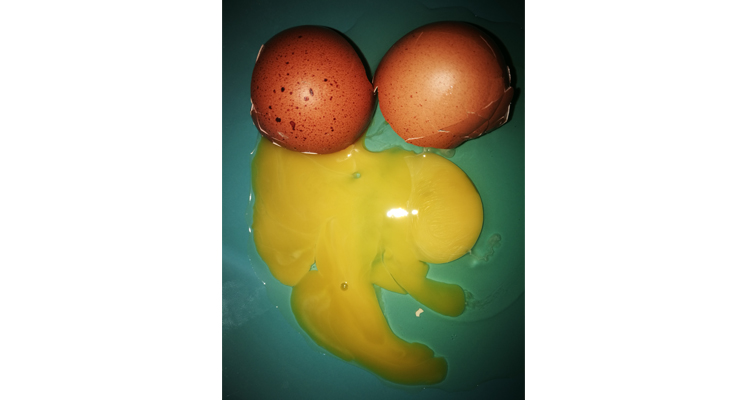 “Can we generate a vibration without imposing it? Can we produce a system without spatial or temporal borders? Can we build an object without being captured by a maze of relationships? The ellipse of the world invites us to slip around in its circles and continuous modulations, among bodies that form and deform, that attract and influence. The instant is a crystal of time. The choice of a posture or an attitude is mere illusion. (Untitled) Humpty Dumpty is the possibility to be, almost, at the centre, in a space without meaning, a poetic space that speaks to us of just how much the essence of creation is vulnerable and magic.” (Cristina Kristal Rizzo and Sir Alice). And in this space, conceptual but not only, Cristina Kristal Rizzo and Sir Alice have manifested their artistic connection. The performance is a mechanism of continuous creation: movement that creates sound, sound that creates movement, bodies, words and gestures that create further gestures, words, sounds and bodies. Dance and sound become themselves. Their meeting offers a possibility of new language and vision.

* Starting from the tradition of Sujet à vif, SOURCE renews its commitment to the meeting of artistic languages, sharing this with numerous entities in Europe: Théâtre National di Bruxelles, the Avignon Festival, Trafo of Budapest and Short Theatre. The artists invited to participate bring a piece of 30 minutes, opening up a space in which to attempt creating new dialogues between varying artistic practices.

Cristina Kristal Rizzo, dance-maker, has been working in the Italian dance scene since the beginning of the 90s. Based in Florence, she studied in New York at the Martha Graham School of Contemporary Dance, she attended the studios of Merce Cunningham and Trisha Brown. Returning to Italy, she collaborated with Teatro Valdoca, Roberto Castello, Stoa/Claudia Castellucci, Mk, Virgilio Sieni Danza, Santasangre. She is one of the founders of Kinkaleri, the company with which she received a great deal of important recognition. Since 2008, she has worked autonomously, producing choreography directed towards a theoretical reflection on regenerating the act of creating with a powerful and dynamic impact as well as opening up reflections on the present times. Around her plays, there are always side activities conducted with intensity, such as conferences, workshops and experimental proposals.

Alice Daquet published her first albums of electronic music in 2003, becoming Sir Alice, celebrated personality for her ecstatic performances. She has performed in France and abroad, not only in clubs but in contemporary art spaces as well. Very quickly, she began using video and photography in her music and sound installations. In 2008, she had her first personal exhibition at Le Consortium (Dijon). With a degree in neuro-science and cognitive sciences, received in parallel to her creations and her study of counter-point and orchestration, she brings her research and experience to examining musical perception and cognition.