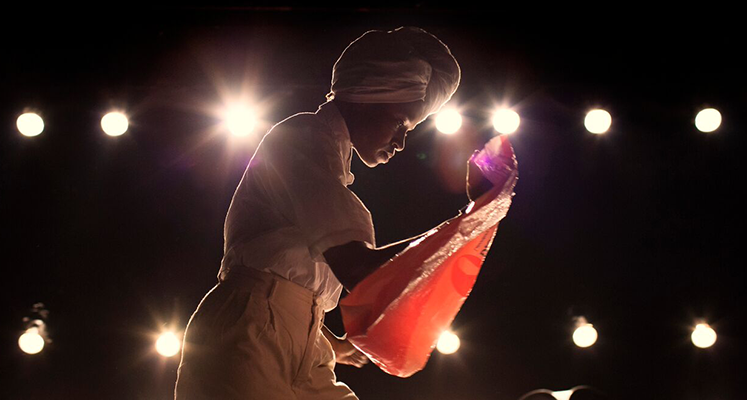 In a strict dialogue with Yellow Towel, her preceding work, with Mercurial George Dana Michel continues her exploration of modern identity and the examination of stereotypes that pervade Western culture, particularly in the United States. Hers is a type of performance pot-pourri, in which a sense of play and a highly personalised style is channelled through dance, song, the use of objects and materials, creating a discourse made up of heterogeneous situations and images that create empathy with the spectator. While in Yellow Towel everything, from the backdrop to the props, was obsessively white, interrupted only by the colour of Dana’s skin and the yellow of her stockings, the colour black dominates Mercurial George. Dana Michel works through the world in which she is a Western woman and a black woman, taking apart the common ideas that freeze the identities of those living at the margins of Society: the poor, black women, the homeless, etc. Dana Michel plays with the scenic elements, a playful solitude: she plays dress-up, puts on wigs, gets dirty in flour, speaks incomprehensible verses, sings Aretha Franklin songs, moves objects. Dana Michel, with an edgy physicality, sometimes obsessive and grotesque, wears different identities, continually transforming from one to another, allowing the stereotypes to emerge. A cruel irony with which to manage a kaleidoscope of images and sensations that allows the fluid game of transformation to be enjoyed fully, while exploring the feelings of claustrophobia and compression, witnessing the game of cultural traps, while we, too, become entrapped.

Dana Michel is a choreographer and performer with artistic residence in Montreal. Before getting her degree in Contemporary Dance at Concordia University, she was a marketing director, top track and field athlete and football player. In 2011, she participated in the program danceWEB (Vienna, Austria) and is currently artist-in-residence at DanceMakers of Toronto. Her artistic approach is a mix of choreography, improvisation and performance art to explore questions of identity. Her 2013 solo Yellow Towel made the Top Five and Top Ten, respectively, of the monthly magazine “Voir” and Dance Current Magazine. In 2014, she won the Impulstanz Award and was named as one of the most significant choreographers of the year by the New York Times. Her work Mercurial George was a winner at the Festival TransAmériques in June of 2016, while in June 2017, she received the Leone d’Argento at the Biennale of Venice for Dance Innovation.