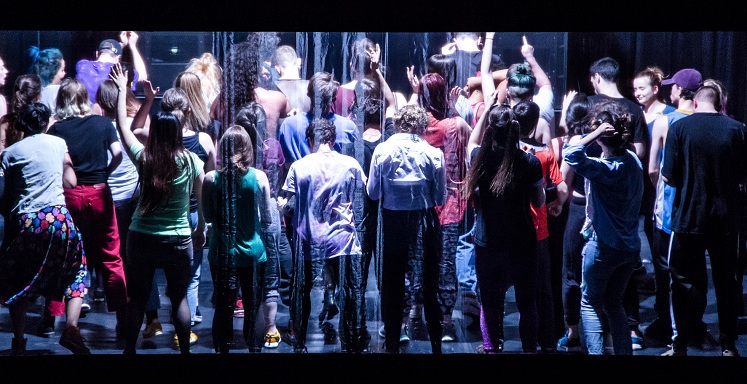 A conference, a Tai Chi lesson and a session of electronic music. In a not-distant future, the participants of these events dance, talk and listen. And the written text, full of intimate thoughts, constantly confronts and superimposes itself over a rhythmic projection of images. Guerrilla presents the confused and contradictory interior universe of a group of people living the same moment, making their ways over the same city streets, sharing the collective consciousness of the same continent and they are impacted, in greater and lesser degrees, by the same consequences. Regardless, they do not know how to face a world that has changed too drastically from the start of the Twentieth Century and is in constant need of new rules, symbols and instruments to be interpreted. Guerrilla describes the subtle and organised war that exists in the mind of any individual within a crowd and reveals how a collective situation possesses multiple universes. Like ocean waves, these people are part of the same group, but their thoughts, their ideas, their past and their aspirations delineate a contradictory landscape – in net contrast to the simple images of carefree fun shown on stage. Guerrilla observes the tensions of Europe: incendiary thoughts that rise up out of our “comfort zone”, easily distracted love, individual and collective problems, the eternal dilemma between passion and reason. If all goes forward in an apparent state of peace, in which we feel protected, why do we involuntarily declare war within our own minds?

El Conde de Torrefiel is a project based in Barcelona directed by Tanya Beyeler and Pablo Gisbert.  As theatre authors, musicians, performers and video-makers, their creations seek out a visual aesthetic and a world where theatre, choreography, literature and visual arts coexist. Their works deal with the notion of temporality, starting with a synchronous analysis of the present and questioning the possibilities of the times we live in. Their most recent works have brought the company international recognition, with performances in important theatres and festivals all over Europe.