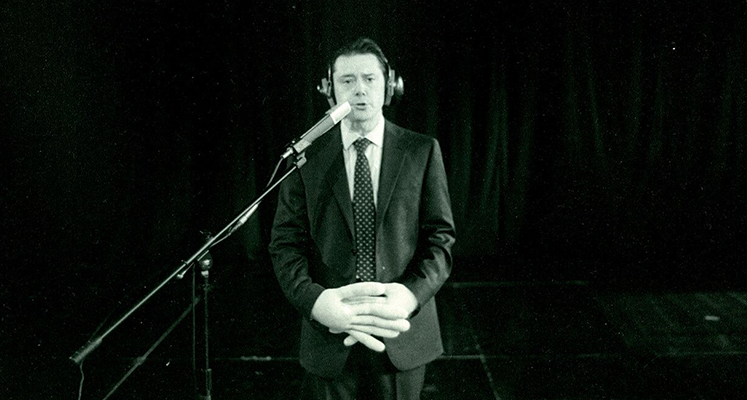 “According to the official press office, the President will address the nation. It’s certainly not the first time in history that a President speaks to a country. There it is. The President will speak. What’s wrong with that? What will happen? Whoever recognises his voice will understand.” Following on from the radiodrama “Alla Nazione” (To the nation) that aired on Rai Radio3, this show is part of a long theatre project by Fanny & Alexander devoted to speeches addressed to a community, Discorso Grigio (Gray Speech) explores the forms and rhetoric of official political interventions. Playing with the commonplace of political oratory and enhancing the potentialities of a word dropped into an interwoven dramatic situation, Marco Cavalcoli, the Wizard of Oz’s ventriloquist, plays the key role of a mysterious President about to give an important inaugural speech to a nation, and one whose speech and personality orchestrates the many indelible fragments of a past and present historical memory. In 2017 Fanny & Alexander celebrated their 25th year by presenting around Italy highlights from some of the most significant shows in their artistic journey. Five years after its debut, Discorso Grigio will be presented at Short Theatre, updated with off the cuff snippets from today that throw new light (and shadow) onto the original production.

Fanny & Alexander is an art workshop founded at Ravenna in 1992 by Luigi de Angelis and Chiara Lagani, and later joined in 1997 by Marco Cavalcoli. They won two Ubu Awards for Ada, A Family Chronicle, their cycle of works based on a story by Nabokov. They are known for their multiyear project based on the Wizard of Oz, as well as their Discorsi series examining the relationship between a community and the individual. In 2015 Fanny & Alexander handled the direction, set up and costuming for a staging of the opera Die Zauberflöte, Mozart’s Magic Flute, commissioned by Bologna’s City Theatre. Their recent works include To be or not to be Roger Bernat, ЗМЕЯ-The Riot of Seduction (Bruges March 2017) and Elena Ferrante’s ‘Da parte loro nessuna domanda imbarazzante. A reading from L’Amica geniale.