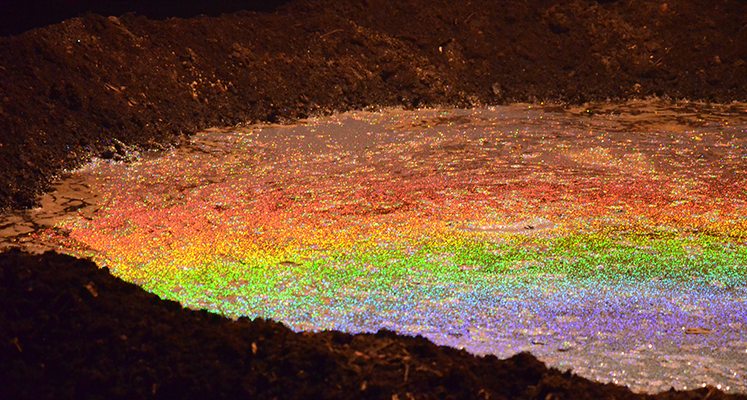 A comet lands on Earth. It forms a crater. Transformations occur. The landscape mutates. The landscape renews itself. In Cratere n° 6899 Robin moves to working with the element of water, allowing her and us a view across the Planet Earth and on into the Universe. With the help of scientific thinking, particularly in the fields of astronomy and geology, alongside our ability to see as far as the confines of our universe and deep into the folds of our Earth, we can stabilise a contact between celestial bodies and topography. By manipulating physical and chemical elements like land, water, dynamite, wind, coloured powders and glass Gwendoline Robin puts herself in intimate relation to these materials, interacting with herself and on herself.
This is a performance consisting of actions that draw deeply from imagination and craftsmanship, constructing a primordial atmosphere – one made of magma, earth and starry matter – in which the scientific experiment is confused with the alchemical operation, with the magic potion. Cratere n°.6899 artificially recreates the powerful and at the same time fragile mystery of the origin of earth and life, accompanying the spectator on a journey through time and space, which after all is also a journey within our very nature. Robin’s experiment is to reconstruct small landscapes that tell visual and acoustic stories, and change the landscape itself: she conceived and devised the performance following an encounter with the astronomer Yael Naze and the marine scientist Bruno Delille in February 2016 .

Gwendoline Robin lives and works in Brussels. A  visual artist and performer since 1997 she produces and realises projects on the borders between sculpture and performance. Through the use of fire, dynamite, glass, and earth elements, she develops volatile and unmanageable events that interact with that fragility and risk inherent within all things. She associates these objects with her body and the spaces she utilises to create ever more complex installations and performances. The objects respond to the space around them, as does movement to fire, light to the sound of a blast. Here the body of the artist can walk, act, dance with danger and the poetry of fire. Her works have been presented at many international performance and dance festivals across Europe, North America, Australia and Asia. She taught at the Académie des Beaux-Arts in Tournai, at ARTS2 in Mons and at La Cambre in Brussels.