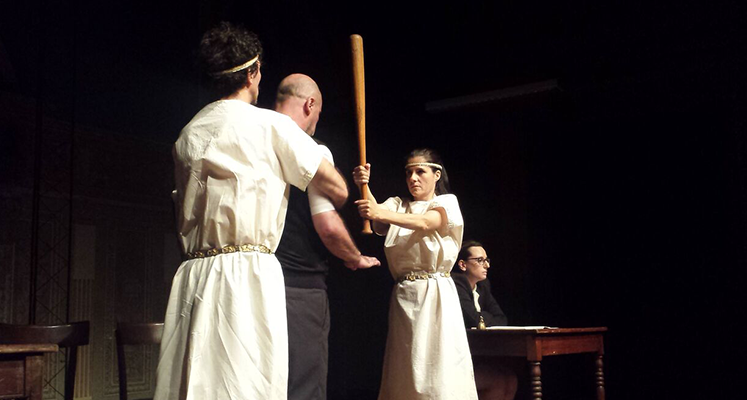 Dialoghi degli Dei was born out of the meeting between Massimiliano Civica and I Sacchi di Sabbia. Written by Luciano by Samosata in the second century after Christ, these Dialogues are presented as a gathering of anecdotes and indiscretions regarding the vices and transgressions of the inhabitants of Olympus: the “family feuds” between Zeus and Era, the continuous complaints for the misdoings of Eros, the gossip between Dionysius, Hermes and Apollo. In this staging, the Gods find themselves in high school, where they become subjects of the relentless interrogations by an austere teacher that torments the two students. Sitting at their desks in shorts, the two mature students, questioned about the intrigues and wrong-doings of the immortals, live the injustices of the educational system, prelude to the injustices of life. Together for the first time, I Sacchi di Sabbia and Massimiliano Civica explore the deeper sense of the word “entertainment” in an amusing search of new ways of “passing time”, taking laziness to new heights while questioning History itself.

Massimiliano Civica, born in 1974, won the Lo Straniero prize and the Hystrio/Associazione Nazionale Critici Teatrale prize in 2007 for his work in the theatre. Also in 2007, he became the artistic director of the Teatro della Tosse in Genoa and won the ETI Nuove Creatività prize. In 2014, he directed Alcesti with a staging in the former prison of the Murate in Florence and won the UBU prize of 2015 for best director.

The company I sacchi di Sabbia was founded in Pisa in 1995 and is known for its capacity of bringing together popular traditions and experimentation, exploring various creative grounds, from literature to cinema, from comic books to opera. The company won a special UBU prize in 2008 and the Premio Nazionale della Critica in 2011. In 2016, I Sacchi di Sabbia won the Lo Straniero prize for their work in the theatre.