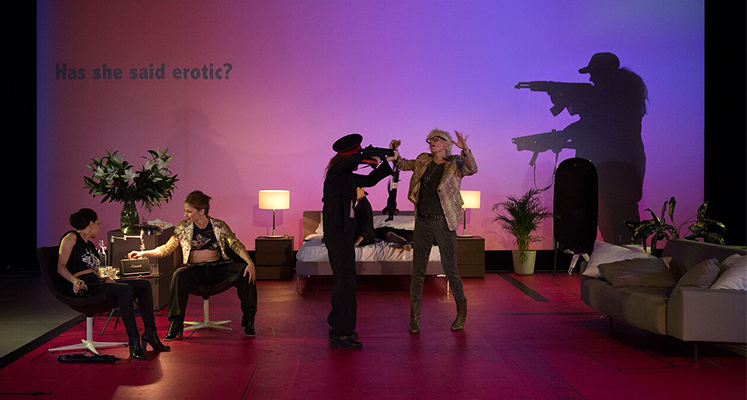 In 2016 Motus returned to Jean Genet’s theatre piece Splendid’s in order to re-stage it with a completely female cast. Copyright rules preventing the changing of characters identities in protected works were deftly side-stepped with an original script rewrite, one even more determined to explore issues of identity and revolt. This time there is no hotel. The original gangsters are now a gang of activists, a “band” of actresses representing generations of Italians. Women with male names, hostile to any attempt at definition, and in armed resistance against the pharmaceutical lobby. Motus now presents Über Raffiche, an “expanded version” of their previous performance, no longer set in a sumptuous hotel but in a bare open space, in a loop where an audience is free to go and come. An exasperated gunshot repetition of words (and ironic micro dances) urging no surrender: like Motus’ revised Rafale who, instead of attempting suicide and giving up the fight – as he did in Genet’s text – now keeps the weapons and … : “Continues to shoot, to shoot again. Because rapid fire in art has nothing to do with terrorism and the terror of this world. If anything it is a way to attack it, to make it crumble, to unveil its grotesque and cowardly core, to free ourselves of fear. ”
From” Motus, An end to gender dictatorships “,  Alfabeta2, October 28, 2016, by Annalisa Sacchi.

The company founded by Enrico Casagrande and Daniela Nicolò has just celebrated twenty five years: an important anniversary for a group that exploded in the nineties with shows of great emotional and physical impact, and one which has been able to predict and recount some of the harshest contradictions of our present day. Since its foundation Motus has been supporting artistic creation – spanning theatre shows, performance and installations – with intense cultural activity, conducting seminars, meetings, debates and participating in national and international interdisciplinary festivals. Their free thinking shows traverse Europe and the world: Under the Radar (NYC), Festival TransAmériques (Montréal), Santiago a Mil (Chile), Fiba Festival (Buenos Aires), Adelaide Festival (Australia), Taipei Arts Festival).