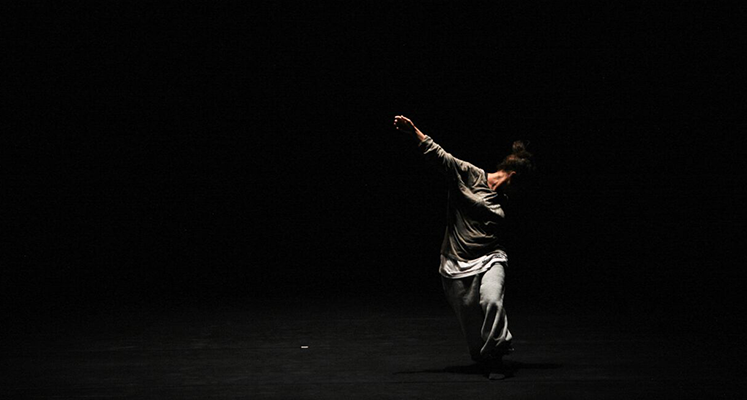 “What allows writing to endure and surpass itself in performance rests in the will of each performer to take risks.” Her talent lies in being able to incessantly invoke rigorous form, where the general rules include their violation, until both the body and the mind surrender and no longer represent a limit. This duplicitous standard allows for a paradoxical experience, a union of infinite submission and abandon. It is only possible to go beyond limits when rigorous rules are applied to both the mind and body in such a way that one is, first, able to identify operating schemes and then, subsequently, discard them. Once such a mechanism has been reduced to its essentials, it is easier to find a way for anyone to escape from themselves. To create an echo of this transcendence within the spectator, the performer must be constantly aware of this dramatic tension which slowly confers the sensation of being at the limits of one’s self and this allows the performer to embrace what is out of their control and, thus, arrive at a sense of completeness. Being able to maintain this fragile and succinct balance is what brings the performer to their extremes, both in terms of what occurs within the piece, but also, more importantly, what occurs outside of it. A renewed awareness that freshly connects and interweaves itself with what surrounds it, benefitting the performance itself. It is only then, balanced on this fine line, for an undefined time, that we give up on knowing.” Nacera Belaza

Born in Algeria, Nacera Belaza grew up in France from the age of five. After receiving a degree in Modern Literature from the University of Reims, she created her dance company in 1989. In January of 2015, she was appointed Knight of Arts and Letters from the French Ministry of Culture. She entered into the world of dance, self-taught, and developed a choreography which promotes, through the study of self, a truer understanding of the body, of space and voids within one’s self. The repetition of gestures, an infinite slowness, the dilation of time. Nacera Belaza’s Company often performs in Europe, Africa, Asia and North America. Thanks to the work of her company in France, she has been able to found an artistic cooperative in Algeria.