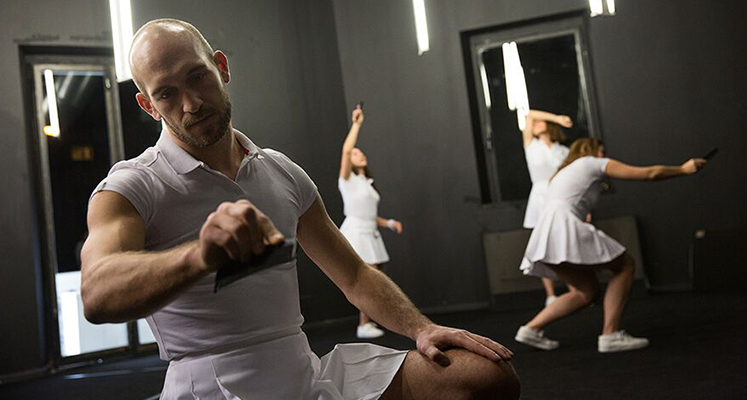 A line of trains. An anti-chamber to Hell. A non-place where fantasy becomes an instrument of resistance to barbarism and human poetry transforms itself into an antidote against the domination of consumerism, the possibility of not having to raise a white flag in surrender. In the end, hiding in some portion of the world – a track at the station, a bathroom, a restaurant car – represents no more than a cage inside a larger political design. Conservatism maps out its confines. School, television, the phony elegance of newspapers and prime-time news stations, all contributing to drag the Nation down to its lowest common denominator. On that train, which moves through the modern suburbs, you can breath in the history of Italy: Italy’s boom, Italy’s massacres, Italy during the financial crisis. Development, bombs, unemployment: a triple boom!
The only chance that remains is individual resistance: resist by playing again and unfurl yourself like an accordion of common sense; resist to not hide your scalp under a bucket of sand. History roles off the workers of the city like rain rushing into the gutter, along with the last notes of a hit song and zero revolutionary sparks, an existence consumed without ever really getting started.
If you enter the creative forge of ricci/forte, you can’t be a mere spectator: proximity involves you regardless of your will, thought is contaminated by action, vision is infused immediately with words. That non-place speaks of all our places.
The title of the performance comes from a verse of the book Petrol by Pasolini, to which ricci/forte feel naturally connected in terms of art and politics and the view of the stories speaking of our present.

Stefano Ricci and Gianni Forte met at the Teatro Stabile of Palermo at the end of the 1990s, actors that had just graduated from the Silvio d’Amico National Academy with a passion for writing and not having felt satisfied personally with the artistic experiences they had had up to that moment. They migrated to New York, where they studied dramaturgy with Edward Albee. They abandoned the work of the actor, dedicating themselves increasingly to their research of writing, until they founded, in 2007, the company that bears their name. They write for all mediums: theatre, but also cinema and television – and perhaps it is this flexibility that allows them to take on, with power and originality, the myriad of themes springing out of the contemporary post-capitalist experience. In recent years, they have represented the Italian scene in Europe and the world.