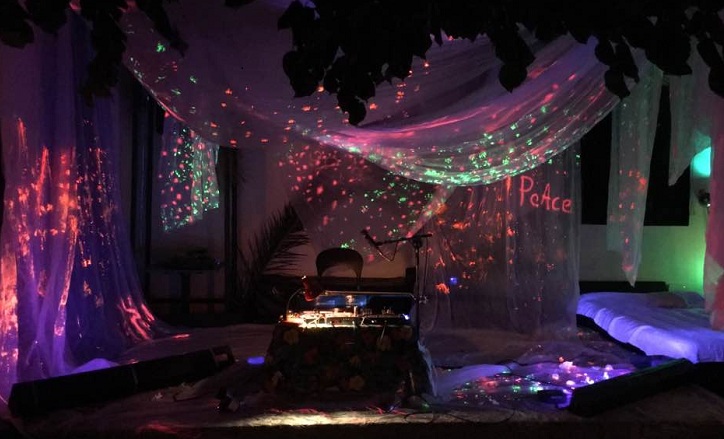 “Where darkness reigns without limits, there is nothing to attend.” (G. Didi-Huberman)

Dark times. But what to do while darkness reigns?
Starting from that question, the far-flung community of Bad Peace finds itself, for the second year, in the free spaces of the Festival, to carry out this sort of moratorium of the imagination. There’s a bed and a radio. The bed is the battlefield and the radio distributes war reports. You are all welcome on the bed with that which you care to or have to contribute to the spread of this debate.
Everyday from 7 p.m. to 10 p.m., there will be live music transmissions, debates and contributions from guests, as well as discussions about Short Theatre 12 and the community that is a part of it; the bed gathers participants, public, the curious, musicians: whoever wants to lay down, rest, dream or jump up and down.
Everyday, with a changing schedule somewhere between 7 p.m. and 9 p.m., there will be a brief live musical show of 20 minutes: the program was developed in collaboration with Fanfulla 5/a, for years a forge for distorted sounds and unaligned music, and includes the presence of Japanese singer-songwriters, noisers with a classical music studies backgrounds, noise-music enthusiasts angry at Rock History…of course, there’s a monophonic tower of amplifiers from which we’ll all be able to hear these unlistenable sounds. For this edition of the Festival, BP has borrowed the title from the writings of Georges Didi-Huberman and some suggestions from the exhibition that he curated at the Jeu de Paume in Paris, entitled Soulèvements (2016).

“those who scream
but also those who remain silent
those that cry and those who make them cry
relief and submission are two sides of the same coin
defeating terrestrial gravity the wind raises and blows the bodies, the salt and the sand towards the same destiny”
(G. DIDI-HUBERMAN)

Bad Peace is an experiment conceived by China and Leo (who play in the ‘60s Pop Music group Wow). On an invite by Short Theatre in 2016, they attempted to create a short-circuit between music, the artistic scene developing around Fanfulla 5/a (and its circle of affinity), and a reflection on contemporary politics, starting with a look at the cultural turmoil at the end of the ‘60s, then moving on to the entire last century. The Fanfulla is the club for new music in Rome since 2006. With a schedule of 300 national and international concerts a year, it is the place giving birth to the players in East Rome’s music scene.