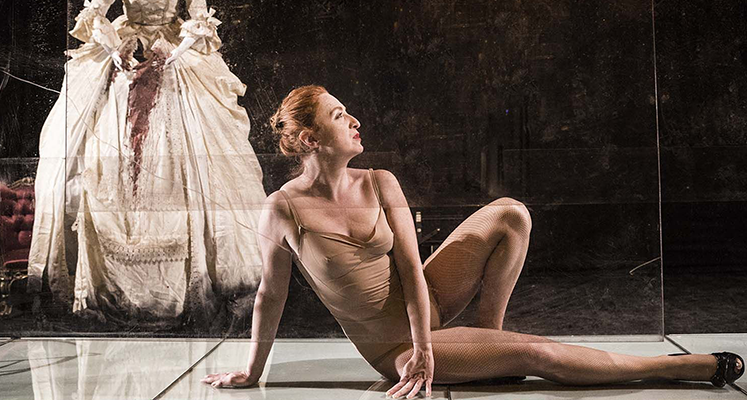 “Jokanaan!”
Herodias, the most violent of the Three Lai, begins thus, with a scream and a play on words, music that starts with the hebrew name of the Baptist and which, little by little, sticks itself into the shredded flesh of Lombardy. Giovanni Testori dedicated more than one text to Herodias.
Marco Martinelli and Federica Fracassi have chosen Herodias as well, Testori’s Erodiade deposed, possessed, obsessive, stammering. Herodias incarnates a time where reason had not yet arrived: a shadow zone not illuminated by the spirit, an eternal purgatory in which understanding and conscience have no place. A trapped character, a two-dimensional figure under glass. On stage, a painting that comes to life and, at the same time, a store or a screen: the only dimension in which Herodias can still survive, still confused by the doubts and questions that the prophet instilled in her. It was enough to shut him up with a cruel and blasphemous act: the head of John, separated from the body, continues to speak, provoke her, question her – questions she cannot answer. Herodias is no longer the Herodias of one time, but now she is herself the Baptist. She takes on his features, a mask inside a mask, she takes his words, unknown to her, still outside her mouth, she looks for signs of him everywhere. From him, from her love for him, her torment is born: What to do? How to go forward? Questions that resound today. What to do with a God that became man and that, like every man, can make mistakes? What to do with what seemed to be a love made of flesh and blood, but, instead, seems to be of the spirit? The spectator looks on. Looks and waits, nothing else to do. They wait. As if there were no other possibility. Is that how it is? Is that how it is today?

Federica Fracassi, a performer with notable sensibilities towards the new theatre, that since her beginnings created her own path in the world of experimental theatre. She has worked with artists such as Valerio Binasco, Valter Malosti, Antonio Latella, Luca Micheletti and has received numerous prizes as best actress: Premio Ristori, Premio Olimpici del Teatro, Premio della Critica, Menzione d’onore and Premio Eleonora Duse, Premio Ubu.
Renzo Martinelli director, is the artistic director of Teatro i, production company that has managed, since 2004, the space of the same name in Milan. The works directed by Martinelli are marked by stagings that are on the cutting edge of contemporary drama. Among his more memorable works are: La Santa by Antonio Moresco (2000), winner of the prize Sette Spettacoli per un Nuovo Teatro Italiano per il 2000; the trilogy Innamorate dello Spavento by Massimo Sgorbani composed of Blondi (produced by the Piccolo Teatro of Milan), Eva (1912-1945), Magda e lo Spavento; the staging of unpublished texts by Francesca Garolla N.N., Se Non Fossi Stata Ifigenia Sarei Alcesti o Medea, Non Correre Amleto.