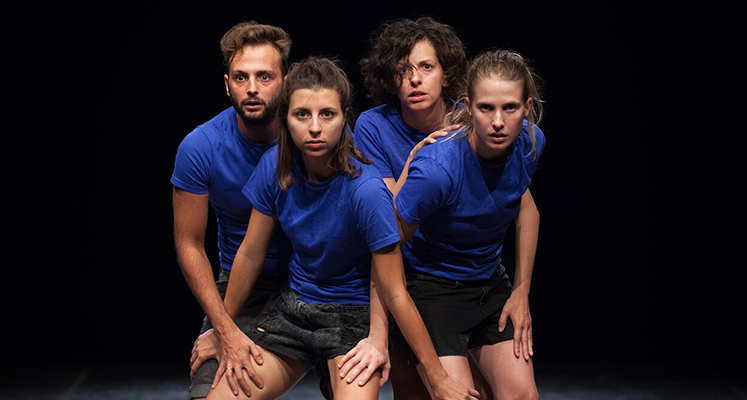 (in double bill with Bau#2 by Barbara Berti)

Un Eschimese in Amazzonia, citation of activist Porpora Marcasciano, refers to the adverse social and cultural context “that compromises, blocks, renders false a situation that would otherwise be more secure and easier”, because it essentially threatens the binary model of sex/gender, homosexuality/heterosexuality, male/female. A binary model that invades our lives and conditions them without us even realising it. The presence in Society of these so-called “eskimos” forces everyone to re-evaluate the rules of Society itself. The core of the work is the confrontation between the “eskimos”, in this case transgender people, and Society. Society follows its structured path while the eskimos must literally improvise, because their presence has not been anticipated. In this case, however, we see things from their point of view and the challenge is to understand if and how much the so-called majority is actually distant. The logic with which the work is structured is that of the “link web”: thus it can occur that, while one follows the Trump victory with growing dismay, they listen distractedly to an episode of MasterChef Italia. What’s the connection? None, maybe only nonsense is around the corner or maybe there is some sense, but it’s a sense that is difficult to accept.

The Baby Walk was born in 2015, with the writing and staging of Peter Pan guarda sotto le gonne. The group possesses various capacities and uses numerous artistic languages: words, dance and video. In particular, it has explored the relationship between cinema and theatre and dance and words. Every project, even if connected to others, is a sort of “new beginning”. The last three works by the company were selected by the Biennale Teatro 2017, 45° Festival Internazionale del Teatro. The Baby Walk are: Livia Ferracchiati (director/author), Greta Cappelletti (dramaturg/author), Laura Dondi (dancer/costumist), Linda Caridi (actress), Chiara Leoncini (actrice), Alice Raffaelli (dancer/actress), Lucia Menegazzo (set designer/director), Giacomo Marettelli Priorelli (light designer/actor), Andrea Campanella (video-maker).

Motivation of the Jury for the Scenario Award
“The confrontation between transgender people and Society represents the metaphor of the Eskimo in Amazon, to which the play gives body and voice. On one side, the unexpected presence that challenges the rules and forces one to look away, told with disarming ease. On the other, the incessant rhythm of the collective, which wants sure answers, expressing through the mechanism of the link web its stranded thoughts. It is a work that is striking for the choice of a narrative that renounces preset performance codes to discuss, with irony and delicate audacity, a theme which deserves new resonance.”