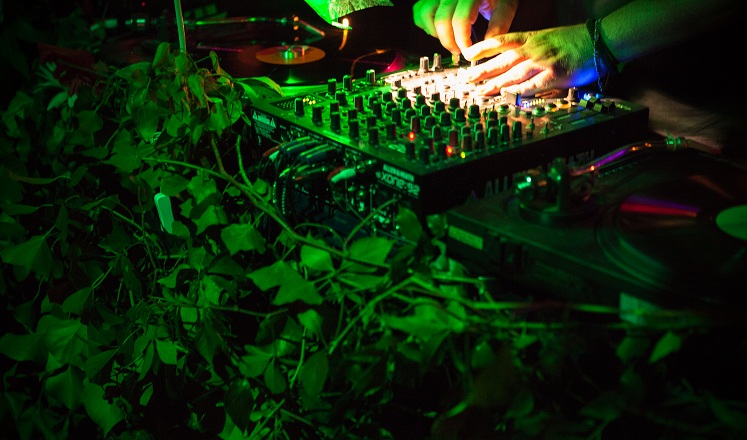 Tropicantesimo has existed for five years and it has evolved into its current form after numerous manifestations, during which it fleshed out its unpredictable musical dramaturgy.
Like with any natural phenomenon, we can’t know its duration; we can’t predict it, it is like an earthquake, a storm or a tornado. It fills you with surprise when you’re already part of it, whether you want it or not. Tropicantesimo gives life to a musical ritual dilated in time, through a celebration of sound and dance. It brings with it the colours and heat of a tropical forest, the flowers and flavours of fruit, the humours of the earth burned by the sun and sweat; but, above all, it incarnates the tribal sounds and rhythms of the Equatorial Belt, imagined and dreamt, refashioned and discovered. Tropicantesimo is a cocktail of sexy hips and shaking maracas.
With its experimental sounds, floral installations, dream-like visions of unnatural gardens and the natural construction of an artificial paradise.
Tropicantesimo has no home, it is located outside the known World, between the mythical El Dorado and a fantasy bar that sells alcohol under the table during Prohibition. Tropicantesimo is a beautiful and baleful music box, white magic and chicken feathers, mutable in form and dimension, all is torrid and chilling. The unpredictable, the accidental, the wondrous, the imminent and the immobile. Tropicantesimo turns on itself, nothing has happened, it was just some noise and some nursery rhymes. What was that, where did it come from and why?