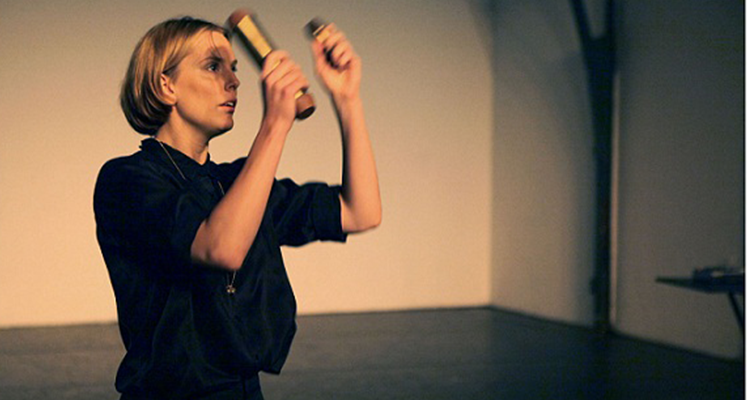 The entire time, from the start of rehearsals to the debut, there was work, during which Alma Söderberg gathered materials, images, texts, making her performance practice the very form and content of her work: the music, words, gestures, rhythms, reference texts and working movements become the instruments of research and composition. Alma Söderberg collects disparate expressive materials, bringing them together through choreography and gesture. What comes to life in Travail, as in other of the artist’s works, is a trace of meaning that is stirred up and lived through, rather than enunciated, played or danced. A flow that destabilises the ties of these materials to their origins and changes their context, giving them the possibility to produce meaning. Travail is a performance that mixes sound, body, voice and song, gesture and movement. A choreographic experience that explores the practice of gathering fragments of anything than can capture the attention during the reading of a newspaper or reality itself, recomposing everything in an original collage made of sound and movement. Alma Söderberg, the only performer on stage, along with her drum machine, creates a new space for meaning which doesn’t prohibit or repress any expressive possibility, acutely transmitting the story of her artistic and linguistic research.

Alma Söderberg is a choreographer, performer and musician. Born and raised in Sweden, in 2010 she graduated with a diploma in choreography from the SNDO in Amsterdam. Her work is a mix of voice and movement, where dance is in a constant relationship with music, sound, rhythm and song. She has created three solo pieces: Cosas, TRAVAIL and Nadita, in which the common denominator remains her work with her voice. In collaboration with Jolika Sudermann she created the performance A Talk, and she performed in Band Jhon the Houseband; in 2014 she created Idioter in collaboration with Hendrik Willekens with whom she also started the musical project WOWAWIWA. In 2009, she received the award for the Entertainement and ITs Choreography Award, in 2010, the Audience Prize at the 100th Festival and in 2011, the  ACT Festival Priz for Cosas.