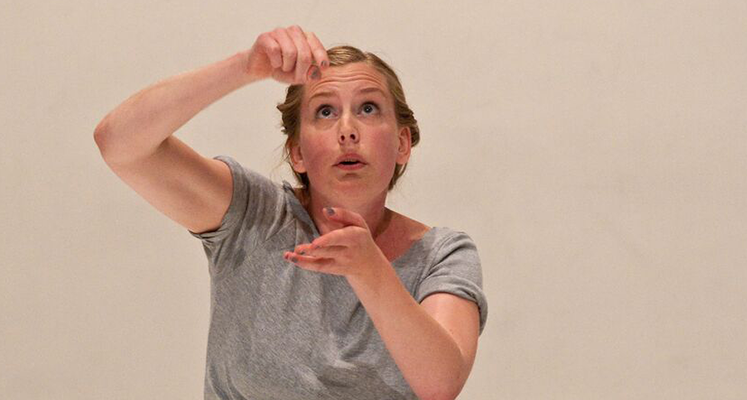 The bare stage presents a lone performer, a collage of sounds, movements, gestures and words that fuse together, generating new scenes. In Cosas Alma Söderberg sings while she speaks, speaks while she dances and dances while she sings. A single continued action links various expressive elements in an endless game between the performer on stage and the public that observes her. Alma Söderberg makes an appeal to the imagination of the spectator, calling up situations, clichés, images, objects, animal noises, sounds of landscapes. Portions of language and reality create a discourse that goes beyond words, creating intuitive derivations to explore, transforming every action into its own sequel. Cosas examines the physical aspects of language and it does this by liberating words from their own meaning. In a continuous flow of songs, words, stamping feet and verbally-assigned gestures, sound and movement become a singular entity. Alma Söderberg alludes to cultural research but then moves away from it, emerging herself, and us, in a state of trance in which the senses are heightened and confusion becomes linguistically codified. Cosas is a performance that make immediacy the instrument to conduct us beyond the immediate.

Alma Söderberg is a choreographer, performer and musician. Born and raised in Sweden, in 2010 she graduated with a diploma in choreography from the SNDO in Amsterdam. Her work is a mix of voice and movement, where dance is in a constant relationship with music, sound, rhythm and song. She has created three solo pieces: Cosas, TRAVAIL and Nadita, in which the common denominator remains her work with her voice. In collaboration with Jolika Sudermann she created the performance A Talk, and she performed in Band Jhon the Houseband; in 2014 she created Idioter in collaboration with Hendrik Willekens with whom she also started the musical project WOWAWIWA. In 2009, she received the award for the Entertainement and ITs Choreography Award, in 2010, the Audience Prize at the 100th Festival and in 2011, the  ACT Festival Priz for Cosas.