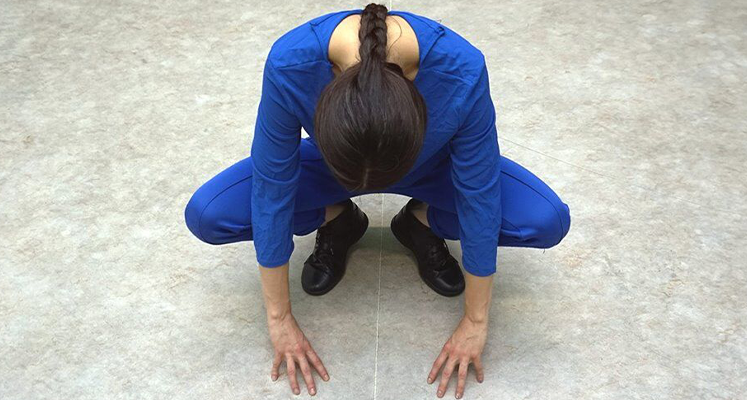 BAU#2 is the final phase of a study that Barbara Berti has conducted at length, creating a dialogue between man’s most profound and instinctive spaces with more conscious perceptions of reality. This study, begun in 2013, inspired a working method applied to dance and other performing arts, centred around the exploration of invisible connections between mind and body, activated in real time by performer and audience in a dialogue between these respective interior spaces. In particular,  BAU#2 seems like the testing-ground of a mental state that allows the body to move on a specific frequency, at the confines of rationality and consciousness, finding the rhythm and condition that consents the performer to engage and embody a possible balance between thought and perception. Such a creation takes form, grows and modifies itself in its meeting with the public, not just spectators, but decisive inquisitors. The elements of text, voice, body and light create a choreography between the visible and invisible, the material and immaterial. BAU#2 is a ritual movement.

Barbara Berti is a dancer and choreographer. She was born in Bologna and works between Italy and Berlin. After studying graphic design, she approached the performing arts through her collaborations with performers and dancers such as Judith Seng, Tino Sehgal, Gabi Schilling and Isabelle Schad. In these contexts, she developed her own authorial style of contemporary dance, elaborated by her own personalised language thanks to hybrid disciplines such as instant composition, body-mind centering, meditation and contact improvisation. In 2014, she won the jury prize at the 100th Berlin Festival with I am a Shape, in a Shape, Doing a Shape, selected in its Italian version by the Vetrina-GDA 2016. Since 2016, she has been supported by TIR Danza.

Motivation of the Jury of the Scenario Award
“There is a striking capacity to create a scenic language where physicality, the work on the body creates what simply defines itself as the work of an original and innovative artist. The rigor of the research process, which is nurtured by ritual and meditation, offers a hypnotic and engaging choreography, a true re-awakening of the body, created by patterns and compositions in real time. Barbara Berti wisely explores the scenic space and the interaction with the public.”