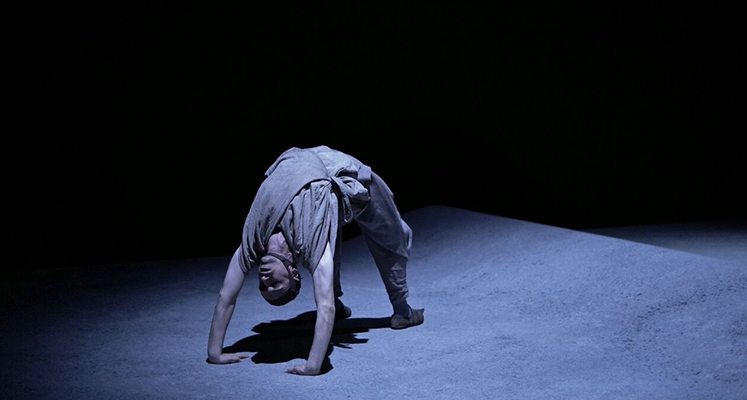 The play is an answer, an answer to the question posed by the cave of Chauvet-Pont d’Arc in Ardèche, France. The perception of that which has remained of life in the distant past, filtered by eyes far away from that ancient way of life and understanding. Yet, we still feel the sensibilities of our ancestors so close to us, as if their myths and primitive rituals might still be, somehow, profoundly present. From distant times, arrives something that shakes us, the echo of another life reaches us. Even if the original meanings have been lost to time and only the memory of certain elements resists, the traces that remain go well beyond the need for meaning. When we enter a cave and contemplate the prehistoric paintings of our ancestors, we feel the past watching us, watching us with a look that is strangely similar to the one with which we look at the past. Their art, hidden in the most darkened recesses of the mountains, seems to demand an answer from the abyss of time. This performance is an attempt at dialogue, an impossible answer to the infinite treasure left to us by the first homo sapiens sapiens in the cave of Chauvet-Pont d’Arc, a wealth of paintings and writings from 36,000 years ago including images of various animal species and hardly-recognisable human figures. Their presence on the living rock confers them with a powerful dynamism, an incredible energy. In the dark of the theatre, we can visit the halls of the cave, getting closer to the past without moving away from ourselves.