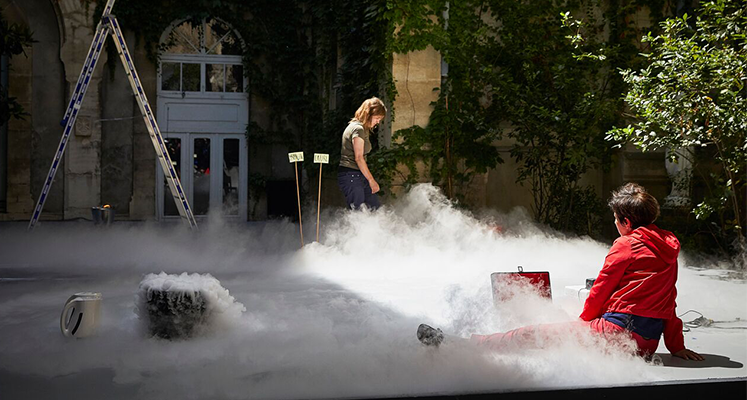 The consequences of an encounter are not always visible right away, you cannot always measure their resonance and echoes, or immediately decipher their meanings. The ability to fully comprehend a meeting can sometimes occur long after it has happened.1327 was a fundamental year in the history of Western literature, a year in which an incident had decisive and imperceptible consequences for an entire aesthetic and cultural tradition in which we are still immersed today. This is what Gwendoline Robin and Gaëlle Bourges want to attempt with Incidence 1327: to measure the consequences of Petrarch seeing Laura for the first time in  Avignon on April 6, 1327; and they do it by following the traces left by that encounter right up to today. Story, language and artificial smoke are the visible signs of this show. One that asks us to prepare ourselves for the unexpected and the intangible, as uncertain events become more visible the less we wait for them to happen. Coming out of the European SOURCE project, Incidence 1327 is a meeting between choreographer Gaëlle Bourges and visual artist/ performer Gwendoline Robin. Starting from the tradition of the Sujet à vif –the legendary section of the Avignon Festival where artists from widely different fields of experience are invited to work together – SOURCE renews its wager on encounters between artistic languages sited around Europe: The National Theatre of Brussels, the Avignon Festival, the Budapest Trafo and Short Theatre. Artists invited to attend challenge themselves against a short thirty minute time format, opening up a space of opportunity and risk, in which they to try to bring together different artistic practices.

Gaëlle Bourges is a French choreographer and dancer. Her works look at art history and its critical relationship with the history of mimesis and live performance. She holds a degree in Somatic Education through Movement from the Paris 8-Saint-Denis University. Gaëlle Bourges is associated with the CCN de Tours and Danse à tous les étages-Scène de territoire danse en Bretagne. She is a resident artist at L’échangeur – CDCN Hauts-de-France, which from the 2017-2018 season is part of the Comédie de Valence artistic collective.

Gwendoline Robin lives and works in Brussels. Since 1997 she has been producing and executing projects on the borders between sculpture and performance, harnessing the elements to develop volatile and intangible actions that interact with the fragility and risk inherent in everything. Her works have been part of many international performance and dance festivals across Europe, North America, Australia and Asia. She taught at the Académie des Beaux-Arts in Tournai, at ARTS2 in Mons and at La Cambre in Brussels.