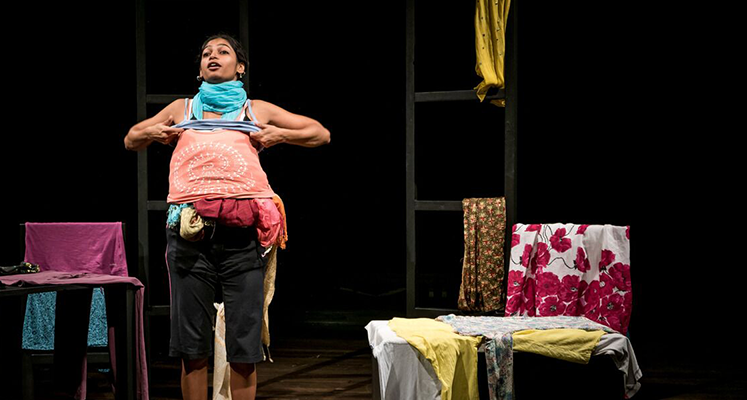 “Caution” is a central part of women’s life experience in India. It is an ordered and assimilated condition that is practised with rigor. Only in this way can women feel “safe”. ThodaDhyaanSe (Be Careful) is a satirical work that challenges this notion of “security.” The performance, coming at a time of widespread anger at the violence against women, confronts the sad bond between the way women dress and the atrocities committed against them, as if the former begets the latter. With irony and lightness, but also precision and a provocative spirit, sole performer Mallika Taneja faces her audience and offers them a text denouncing the hypocrisy hidden in any vision of a woman as victim, combining it with an act so literal that it assumes all the power of a symbol. Stripping away a culture that has always hidden behind  traditional and puritan customs, Mallika Taneja offers her own interpretation of what it means to “be on guard, ”highlighting the contradictions at the heart of India’s stunted social progress.
Be Careful is a show whose extreme simplicity and theatricality exposes situations and paradoxes that seem both geographically as well as culturally far from us. But on the contrary they are actually much closer than we would like to think.

Mallika Taneja is a Delhi- based actress. In 2015 she received the ZKB Acknowledgement award for her show Thoda Dhyaan Se from the Spektake theatre in Zurich. In August of 2017 her latest work Rukaawat Ke Liye Khed Hai will debut in Dehli.