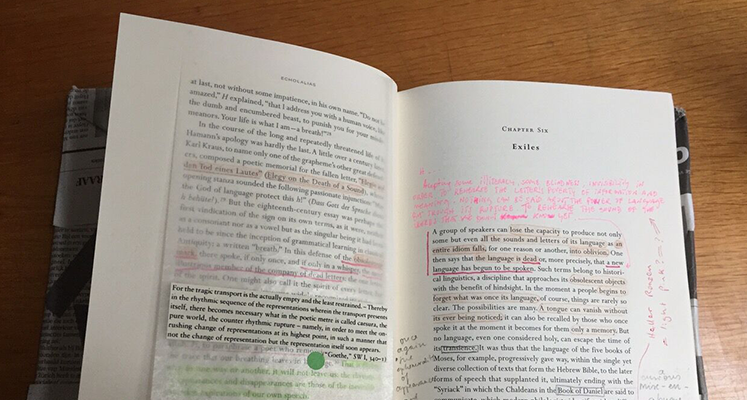 Margine is inspired by the 19th century practice of ‘marginalia’, which cultivated the act of “personalizing” a book before offering it to a friend or a lover by writing notes in its margins. In Margine this expression of love or friendship becomes a poetic gesture with which five readers – the annotators – write notes in the margins of the same copy of a book they have chosen together, one after the other, according to a predetermined order. In this way a hybrid manuscript is created, one which mingles with the existing text, transforming it via the sharing of an object, space and time. Margine wants to create the conditions for a practice of collective reading and writing which can then be shared with a community. Margine aims to anticipate and imagine the other, developing new possible individual and collective narratives, using a book as its starting point. Once annotated, the book will continue its life, passing from reader to reader: its path will be traced over the next ten years through a kind of logbook of all the readers who encounter this tract in the years to come. On September 12th the five annotators will meet at Short Theatre 12 for a public meeting where they will discuss the book’s annotation and sharing process, as well as answering questions from Ivana Müller and Lorenzo Pavolini. Margine is the Italian version of the Notes project commissioned by the Theatre Freiburg in Germany and realised between Autumn 2016 and Spring 2017,

Ivana Müller is an artist, choreographer and writer. Her work, which includes performance, installations, video lectures, audio projects, guided tours and web based work, rethinks the politics of spectacle and the spectacular by revisiting places of the imagined and of imagination. She contests notions of ‘participation’, investigates the significance of values and their representation while taking her inspiration from the relation between performers and spectators. Despite working with different formats it is theatre that remains her principal context for developing her output. How Heavy Are My Thoughts (2003), While We Were Holding It Together (2006), Playing Ensemble Again And Again (2008), Working Titles (2010), 60 Minutes of Opportunism (2010), Partituur (2011), In Common (2012), We are Still Watching (2012- 2015) and Edges (2016) are but a few of her works that have been presented at major festivals and theatres across Europe, the USA and Asia over the past 12 years.