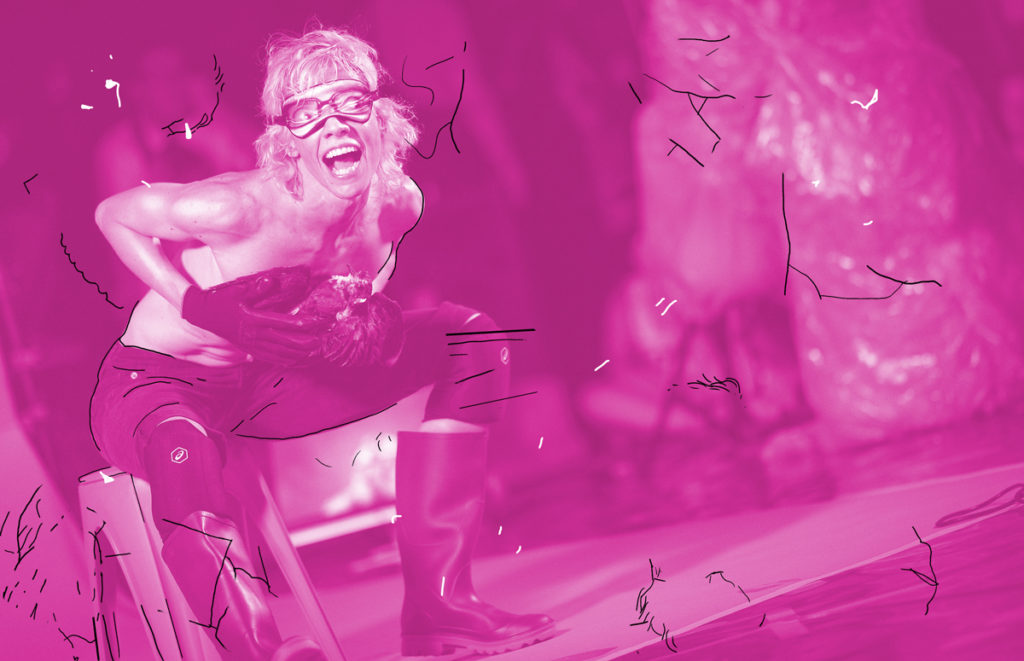 Chroma Keys is a foray into the wonder of fiction, into cinema and all its old stereoscopic “tricks”. The possibility of the sudden appearance and disappearance of an “alien” body during a scene of a film – which in itself was the basic artifice of so much cinema  from its birth – had intrigued Motus for some time, but they never imagined arriving at such a brazen sabotage of the frame. Panorama, their last show together with actors from La Mama in New York used ‘Green Screen’  and while it too has its roots in cinema here it is more to interrogate/boycott the often demeaning dynamics of auditions…  However, with Chroma Keys they use the same simple green screen/infinite photographic backdrop to accelerate the liberating and visionary power inherent in this ancient cinematographic technique, revealing its mechanisms in a theatrical and ironic manner. The cut-up of films worked on by Silvia Calderoni are preceded by a fragment from ‘Satantango’ by Bela Tarr, which is the key to understanding the whole operation: the famous scene of two walkers in high winds takes place in an apocalyptic climate, lit in a way that spells imminent disaster … and the hallucinagetic journey continues through a selection of film fragments that somehow evoke/treat/reflect loss, that sense of something gone or going away, of abandonment, but also of discovery. The futuristic and dystopian atmosphere remains ambiguous and suspenseful: it presupposes a “world to come” or rather, “a world to come without a world”, with the emergence of an event  “to end all events” as perhaps in ‘Melancholia’ by Lars Von Trier? It is up to the audience to complete the script.

Motus was founded in 1991 by Enrico Casagrande and Daniela Nicolò, going on to explode throughout the 90s with shows of great emotional and physical impact that managed to foresee and recount some of the most bitter contradictions of our present.
Since its foundation, Motus has supported artistic creation – theatre shows, performance and installations – together with intense cultural activity, including conducting seminars, meetings and debates as well as participating in national and international interdisciplinary festivals. It has received numerous awards, including three UBU awards and prestigious special awards for their work. In 2020 the directors of the company will also be artistic directors of the Santarcangelo Festival’s fiftieth edition.