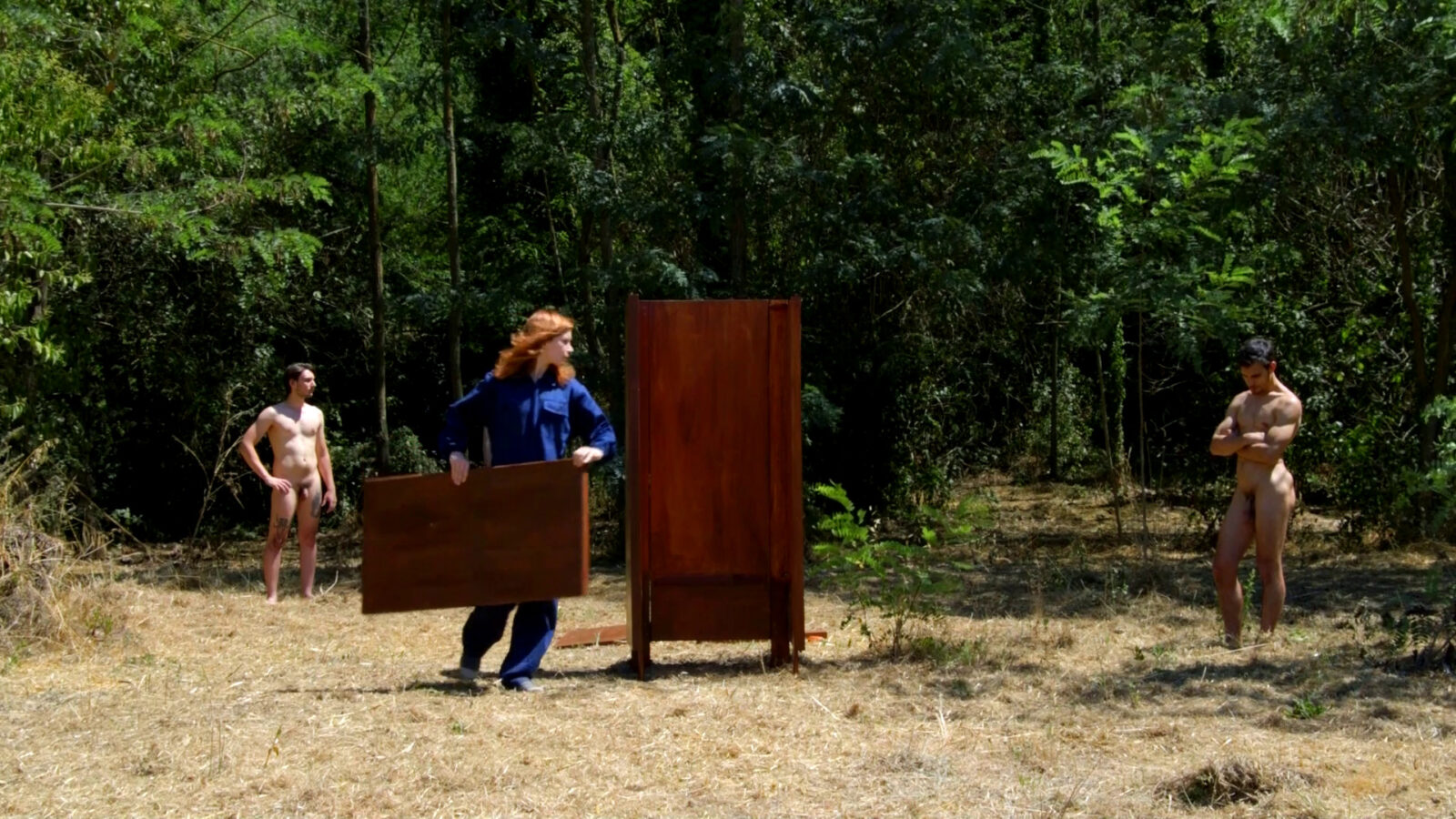 Thanks to the collaboration with Accademia delle Belle Arti di Roma and Short Theatre 2022, three works of former students of Accademia are presented in the Atelier of Mattatoio di Roma. They can be seen for the whole first week of the festival, from 7 to 11 of September.

Three young graduate artists from Accademia delle Belle Arti di Roma who, starting with video, have undertaken heterogeneous research paths combining different artistic languages.
Three actions, each in their own way incongruous, which place the body of the artist / performer / woman in an uncertain, if not downright senseless, relationship with the space that temporarily welcomes them.
Three video works in which being and happening coincide precisely, while simultaneously giving up on usual narrative rhythm.
Three visions that impose a privileged point of view by declining the performative act in favour of cameras. 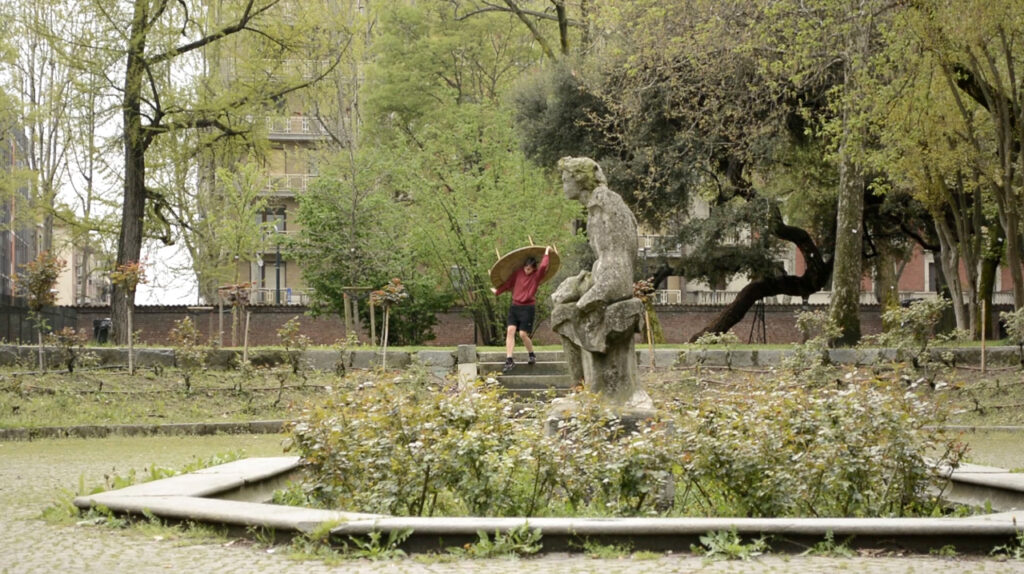 The artist enters the space carrying a bulky golden trampoline. She places it in front of a broken statue, transfigured and worn out by time. She gets on the trampoline and begins jumping, her eyes fixed on the statue. A silent dialogue begins in which their opposite characters speak to one other. It is a cry against immobility and rigidity, a manifesto of intent, a promise of struggle. 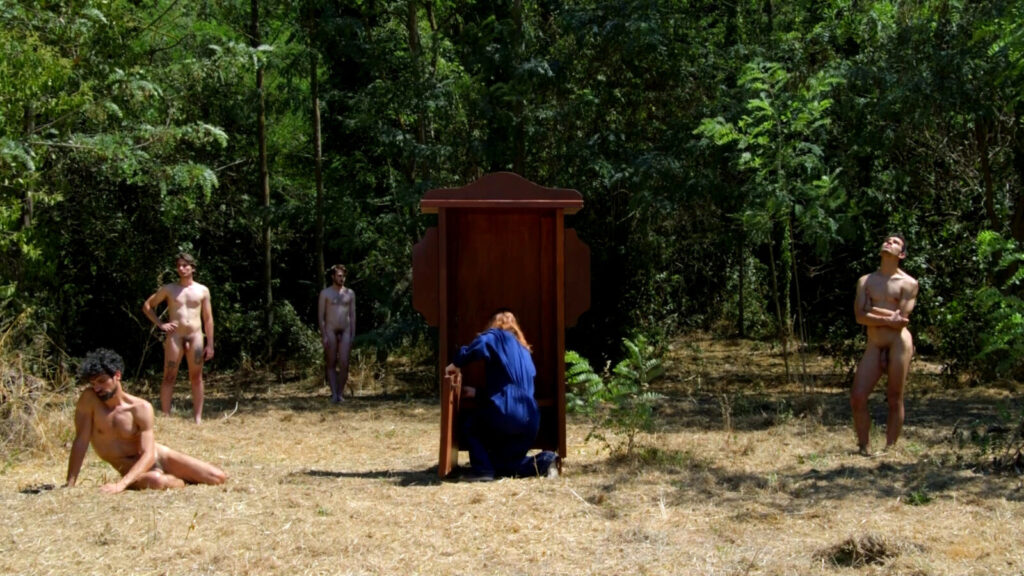 Starting from gender identity issues, this work creates a context in which our increasingly brittle traditional attributes are confronted: here the role of faber or artisan is assumed by the female performer, while passivity is not just relegated to the domain of the male figures, but also reduced to a purely aesthetic function.
The performative action ends in a precise composition, a variation on the sense of balance, which transcends the monolithic concept of gender roles. The confessional under construction, the central object of the frame and a symbol of places of exclusion for women, all defining a threshold of detachment in the visual field, while at the same time creating an area of contagiousness.

Ambra Lupini
The little old woman who used her head 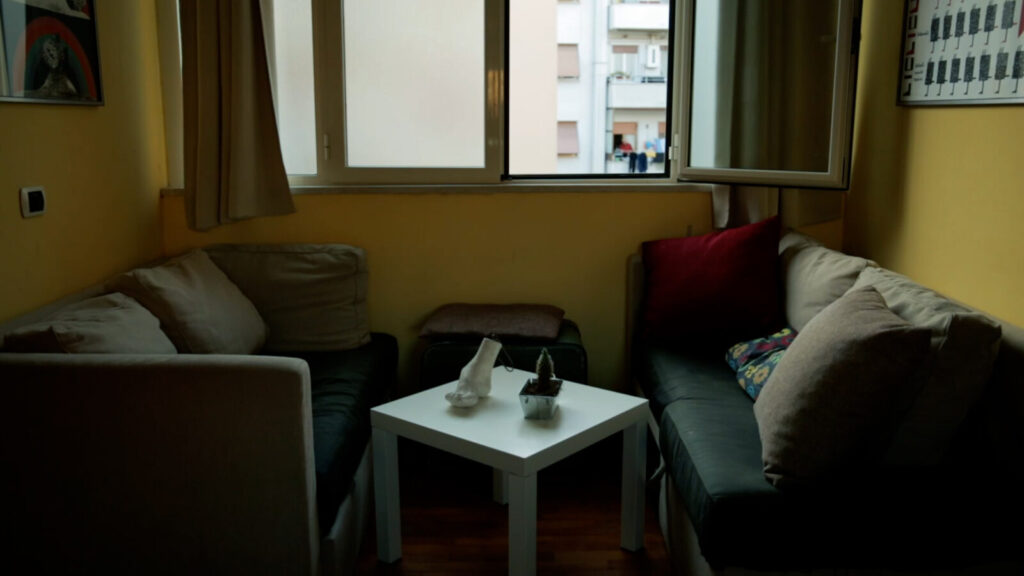 When speaking of obscenity – of which he was often accused – Carmelo Bene defined it as “os-skené”, what is “off the stage”, what should not be represented and which should not be exposed in public.
Nonetheless, his main artistic goals are precisely aimed at getting lost, of losing identity and meaning – or to put it more simply, of “not being on stage”.
The artist cancels the identity and substance of places, stripping them of everything that makes them recognizable. The apparently absurd action of “undressing” living rooms, places commonly used for hospitality, produces two opposite possibilities: on one hand it creates more space, on the other it denies welcome.

Lucia Bricco (Torino, 1988).
She studied at the Albertina Academy in Turin and at the Complutense Academy in Madrid. She graduated from the Academy of Fine Arts in Rome in 2015 with a thesis entitled “In Between, an investigation on vision. A Study of the possibilities of living an exchange “.
Her work, in the form of performance and drawing, is centred on spaces dealt with both privately and collectively. She is interested in the fragmentation, coexistence and mutability of those elements inherent in human existence.
Since 2015 she has participated in performance art residencies, exhibitions and festivals in Italy, Spain, Poland, Ukraine, Germany, Greece, France, Czech Republic and Belarus including: BLACK KIT, International Performance Art Archive DIE SCHWARZE LADE | BLACK KIT, Cologne (DE) (2021); Performance Crossing, Prague (CZ) (2020); ZABIH Performance Festival, Lviv (UA), Performensk, Minsk (BY), Platform Project ’19 representing Sub Rosa Space in Athens (GR) (2019); Performance Platform, Galeria Labirynt, Lublin (PL) (2017). She has lived in Athens since 2018.

Ambra Lupini (Ascoli Piceno, 1993).
She graduated in Multimedia and Technological Arts from the Academy of Fine Arts in Rome. In 2018 she obtained a Master’s Degree in Art Documentary “Filming art”, with the film “The Rats who Invented the Wheel” presented at the Wanted Clan in Milan. In 2022 she graduated from the Experimental Centre of Cinema majoring in directing documentaries.
She has exhibited her work in group exhibitions at both the Pelanda space and in the Accademia gallery. She has collaborated with various archives including Istituto Luce, the Vancouver Archive, the Center for Home Movies, Prelinger Archive and Aamod.
With Aamod she made two short films: “Reconstruction of Destruction”, in 2020, presented at the Sun and Moon Festival of Palermo and in 2022 she made the short film “The Period”, winner of the Memory Ciack section, and presented at the Giornate degli Autori during the 79th International Exhibition of Cinema in Venice. She lives and works in Ascoli Piceno.