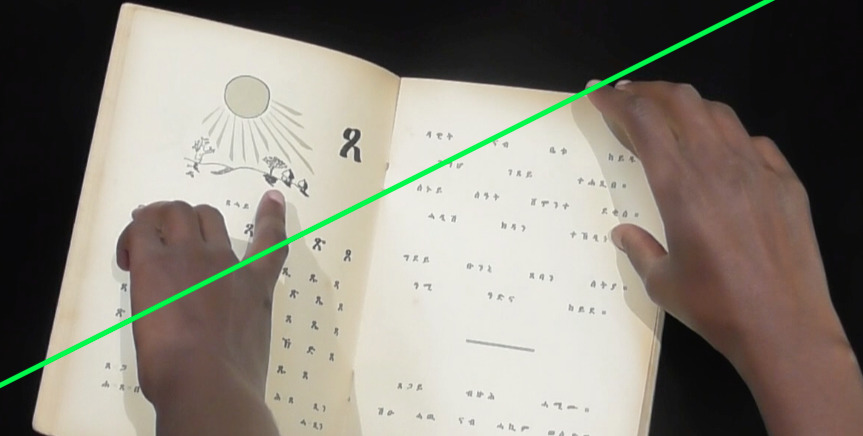 Muna Mussie is an Eritrean artist based in Bologna whose research is focused on (dual) identity in terms of origin and adoption. The main traits of her work are a performative writing, essentially precise gestures, a bidimensional visual representation, a millimetric dramaturgic set design, a combination of ordinary/extraordinary minimalistic gestures. Her artistic practise is based on the sense of proportion, a way for turning the stage into an externalised internal space, in the shift between different emotional states.

The subject is always located in the world and its body is the situation.
I am the Subject for myself and the Object for others.
[…]
When I close my eyes and I try to define my image, what do I see?
A blind mirror, an absence.
Nobody owns its own image because a correlation is implied.
All that is immediate – my body, my image – is distant from me.

In Curva Cieca Muna Mussie works with Filmon Yemane, an Eritrean boy currently living in Bologna and blind from the age of 12. Their performance deals with the discovery of Muna’s mother tongue through a dialogue made of words, signs and changes of meaning. Led by Filmon’s voice, we listen to Tigrinya lessons supported by images from an old spelling-book. The artist’s body overlaps with the sinuous lines of the alphabet, suggesting a dynamic mimesis.

Curva Cieca is a meta-educational tool that creates an intimate landscape through a didactic format: a biographical narration inspires philosophical reflections and quenches the presence’s thirst: a law-abiding body tries to match a constantly elusive image.